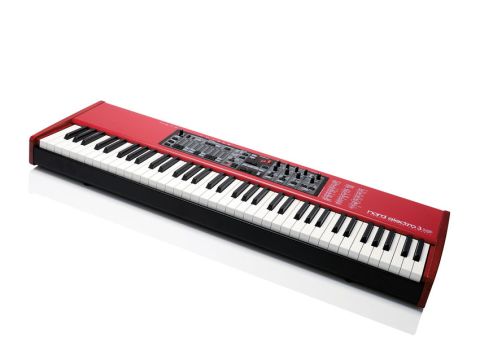 The weighted keyboard extends the E3's appeal, and its power makes it a leader in the market.

When we reviewed the Electro 3 in 2009, we were very impressed with its good balance of features. The realistic sounding organs, pianos (electric/acoustic) versatile effects section and user sample upload ability - packaged in a very lightweight and compact form factor - has since won it many fans.

Our only real reservation was the lack of a weighted keyboard to really get the most from the piano sounds. Thankfully, Nord have been listening to customer feedback and have answered with the E3HP.

The most obvious change from the standard E3 is the addition of a 73-note weighted keyboard. This is great for those wanting a more realistic piano and electric piano playing experience, and should attract serious piano players to the E3 who perhaps wouldn't have been interested in it before.

Couple this with the fact that the E3HP weighs in at only 4kg more than the standard E3, and this makes for a very portable weighted board - in fact it's the lightest 73-note-weighted board on the market at 11kg (24.25lbs)

Feel-wise, the action is great for playing pianos and fast enough for playing organ and clavs - although those specialising in organ will likely prefer the standard E3, with it's semi-weighted waterfall action.

There's no sloppiness or sluggishness, and the weight is nicely balanced, with a quick and precise key bounce-back.

Nord have also added a delay effect to the E3HP, with tap tempo and ping-pong mode, which is a bonus. It sounds very analogue-like and is great for dub, reggae and psychedelic styles. On top of this, there are now four program buttons that access the four sound banks, making it quicker to navigate than the E3.

These buttons also double as four live slots in 'live' mode, continually saving all front panel settings (just like the Stage 2), so when you hit on a great sound in the heat of the moment you can easily recall it.

Other changes include four levels of additional velocity dynamics to get the most from the piano/EP sounds. On top of that, the long release and string resonance features found on the Stage 2 and the Nord Piano add a much more natural decay to the piano sounds.

These features really improve the authenticity of the overall playing experience. Also unique to the HP is the support for just about every make of control pedal for hands free performance control.

All these additions and tweaks have only improved on what was an already excellent keyboard and really open up the E3's appeal. Piano players will really dig this board's weighted feel, and it still sounds great.

It's supremely portable and the fact that you can make your own samples or choose from the ever-growing Nord library will mean that you can always stay up to speed with the most current sounds, making it a great long-term investment. Right now the E3HP is hard to beat, and it's way more versatile than its closest competitor, Korg's SV-1.

The weighted keyboard extends the E3's appeal and its power makes it a leader in the market.