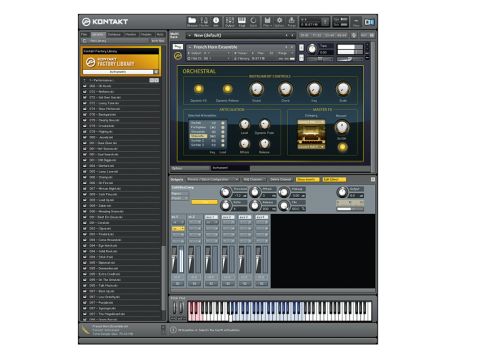 A good update rather than a mind-blowing one, but taken as a whole, Kontakt is still the ultimate sampler.

When we reviewed Kontakt 4, it received top marks, and rightly so, as it had become the most powerful and rounded sampler on the market.

In the intervening couple of years, NI have refocused their product line, with hardware (Maschine, Traktor Kontrol and Guitar Rig Kontrol) now playing a bigger role.

However, with such an enormous array of Kontakt libraries available from NI and numerous third parties, Kontakt now feels like the flagship of NI's sound-creation range, offering both deep sample manipulation and immediate ROMpler-like gratification.

It runs as a standalone app and a VST/AU/RTAS plug-in. Note that the library comes ready-compressed this time, using Kontakt's lossless audio format, resulting in a smaller 25GB disk footprint.

The content is now arranged in large container files as opposed to individual WAVs. However, Kontakt addicts will recognise the same seven-category library (Choir, Band, Orchestral, World, Synth, Vintage and Urban) with over 1000 instruments.

One thing that continues to frustrate Kontakt users is the process of upgrading the sample library when a new full version is released. To maintain compatibility with old DAW sessions, users have been encouraged to install from scratch the new library and retain the old library as well.

With nine dual-layer DVDs to install, this not only takes ages (and makes Komplete 8 Ultimate's hard drive-based installation seem highly attractive) but also leaves you with a legacy sample-set eating disk space.

Kontakt 5 doesn't work with earlier library versions. On the upside, previous projects work fine with the new library, so you can delete your old one to save some space once you know it's all working OK.

The only new sample content this time round is the Retro Machines Mk2 library, which is also available on its own for $79 as a Kontakt Player instrument.

Those who buy Kontakt 5 get a code to download the pack, which contains patches sampled from 16 vintage hardware synths, from the obvious (Minimoog and Roland MKS-80 Super Jupiter) to the unexpected (Crumar Roady electric piano and String Melody II string machine).

The interface is nicely done, with a Sound knob to radically EQ the oscillator, four filter types, reverb/echo, arpeggiator and more. There are eight Sound Variations per patch, showcasing the diversity available from the raw samples, and you can even morph between them with a slider.

Sonically, it's characterful and inspiring, with the pleasing, clear-yet-warm sound associated with analogue. Retro fetishists will love it, but it's totally suitable for modern electronic and pop too.

The immediate playability and simplicity of editing the sounds means this library is perfectly in keeping with the über-ROMpler aspect of Kontakt.

On to the new features, then, and first up, you get four effects: Solid EQ, Solid Bus Comp, Transient Master and Tape Saturator.

The first three are basically re-skinned versions of NI's new Guitar Rig-based effects (Kontakt 5 users can only use them in Kontakt and not as general purpose plug-ins via the Guitar Rig shell).

The Solid EQ is absolutely excellent, and although you'll miss the attractive skin from the Guitar Rig version, the sound is crisp and punchy. Likewise, the Solid Bus Compressor delivers the famous SSL buss compressor sound, with the added benefit of a mix blend.

Of the other two newbies, the Tape Saturator is the simpler, but also the better, of the two. By contrast, the Transient Master lacks the finesse of much better dedicated plugins.

But overall, with three of these processors sonically equal to dedicated plug-ins, you may find yourself doing more inside Kontakt, and we expect library builders will exploit them too.

The effects are complemented by 37 new filter types courtesy of the minds behind NI's wicked Massive synth. These include nine 'adaptive resonance' types with managed resonance peaks, as well as classic ladder types, new state variable efforts (both parallel and serial) and a couple of new formant types.

The ladder types stand out, adding real bite. The adaptive resonance ones are comparatively restrained, but they allow for fully cranked resonance flavours without the associated ear-shredding volume levels, which is precisely what they're designed for.

The new state variable multimode filters are our favourites, and modifying cutoff and bandwidth together produces excellent evolving sweeps.

Retro heads will welcome two new sampler types originally found in Maschine, MP60 and S1200 - these are, of course, emulations of Akai's MPC60 and E-MU's SP1200.

The S1200, with its 12-bit, 26kHz sonics, is particularly attractive for crunchy old-school beats. Like the real hardware, they're basically 'black box' affairs with no adjustable parameters.

Kontakt's adoption as the industry standard sample library format is primarily down to its deep scripting capabilities and the ability to create custom interfaces for Kontakt instruments.

There are a number of additions to Kontakt 5 that will be of great interest to those developing libraries, while us regular users will no doubt be reaping their benefits before long as end users of their patches.

This is great if you want to add overall processing to a bunch of groups (drum kits spring to mind).

In addition, Kontakt scripting now includes a MIDI file player, allowing access to MIDI patterns. The newly available Studio Drummer library, which you can purchase as an add-on pack, makes good use of this.

There's also a new timestretch algorithm, Time Machine Pro, courtesy of zplane.development. This offers better real-time non-sliced stretching of tonal material and is a real step up from Time Machine 2.

You also get real-time sample reverse that works in conjunction with timestretching, which is pretty novel. Previous algorithms are still available - a good thing, since this one is more CPU-hungry.

Overall, Kontakt 5 has some pleasing additions, with the emphasis on features over content. Existing users who are more interested in the latter may question whether they really need to upgrade, though we suspect their opinion may change once third-party libraries start to leverage the new features.

Finally, for new users - particularly those wanting lots of sounds - stumping up a little extra cash would secure Komplete 8, which represents much better value for money.

Now listen to our Kontakt 5 audio demo to hear:

Crawling Lead from Synths/Leads in the library. Here we're trying out some of the low pass filters, sweeping them down with medium resonance then back up with maximum resonance. First you'll hear the filter that loads with the patch - Pro53 - then it's the Ladder LP4, AR LP4, SV LP2 and finally the SV Parallel LP/HP. Note not only the difference sounds but also how they overload. The AR LP4 is particularly well contained at high res but retains the sound.

Kick and Snare - first a kick in Kontakt sampler mode then S1200 and MPC60 modes. Next the kick flat and then with transient master effect. Now the same processing sequence with a snare. Note how the S1200 sounds darker and MPC60 crisper than the Kontakt sampler.