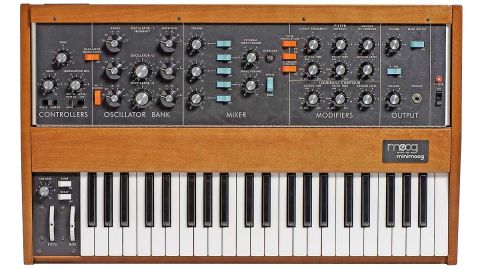 While bringing back all the characteristic sound of the original Minimoog, Moog has simultaneously added some elegant modifications.

Released in 1971, the Minimoog was the essential Prog keyboard, the world-beating bass sound behind Michael Jackson's Thriller and the Disco revolution that preceded it, and later, the synthesizer of choice during the rise of '90s French House and Post-Rock.

Lost in the shuffle from digital synths to software, there was a period in the late-'80s/early '90s when a vintage Model D could be yours for a few hundred dollars. Now an original unit can set you back well over £5,000.

The Model D's original brief was to give keyboard players of the early '70s a way to combat the dominance of your Marshall-stacked guitarist on the other side of the stage.

But after a while keyboard players discovered that the breadth of the design could also produce otherworldly atmospheres, incomparable basslines, and serve as a unique vehicle for processing external audio.

While all of this is certainly still on offer with the 2016 version, right off the elephant in the room is whether Moog's painstaking recreation gets it right. The succinct answer is yes.

This doesn't mean you won't notice some variation between the old and new models. Line up ten Minis in a row, and you are almost guaranteed to hear and feel differences in terms of sound and performance.

Proof of the pudding

In the wake of the Voyager and the more recent Sub 37, what features to bring to a newly revived Model D was probably a far bigger consideration for Moog than whether it could pull it off at all. At its heart, this version is still a three oscillator monophonic synth with white/pink noise, the most desirable filter design on the planet and the consistently celebrated left to right user-friendly interface. The integrity of that design has largely been maintained, so let's examine what's different with the new version.

The first decidedly unsexy, yet notable, feature that the new machine brings to the table is an external power supply. Many Minimoog players and technicians have credited the original's power supply as one of the chief reason for the its infamous tuning issues. While ambient temperature shifts were also a factor, fluctuating power was known to send vintage Model Ds into histrionics.

The current models are now being shipped with a locking 4-pin XLR connector which, while difficult to replace quickly should you mislay it, delivers stable 100-240 VAC; 50/60Hz juice.

The 44-key Fatar spring action keyboards included with the new Minimoog are of the same high quality as those seen on the Voyagers. The action is pleasantly responsive and refined, unlike the stiff and inorganic response you'll find on a vintage model unless it's been expertly refurbished or exquisitely cared for.

To the far left you'll find the familiar groundbreaking pitch and modulation wheels that have since graced most synthesizers.

Both are the white, ridged versions that are most commonly associated with the instrument but neither wheel features spring-loaded action. Instead the pitch wheel snaps back to its traditional centre-detent position while the mod wheel moves freely. It should also be noted that the mod wheel on this particular synth does not transmit or receive MIDI data.

One of the most common modifications made to the original Model D once MIDI began to rule over the '80s, was a MIDI DIN jack whacked onto the rear chassis. The Voyager logically had MIDI onboard when it was first released, and the new Model D has a somewhat limited implementation of the standard as well. MIDI In and Out (Note, Velocity, Pitchbend and Sysex) as well as MIDI Thru jacks are available. Aftertouch and modulation at the MIDI In port, however, are sadly not on offer.

The next notable change is in the range of modulation options that Moog has built into the synth. In days of old, oscillator 3 was commonly employed as a modulation source, but for the 21st century edition Moog has added an LFO to the proceedings.

Controlled by a half-size pot alongside the traditional glide and decay switches, the new Model offers both triangle and square wave modulation. To select the square wave, all you have to do is gently pull up on the pot, and the built-in switch will lock into the secondary position. Rotating the pot will then control the rate of the LFO - a nicely executed design.

Additionally you can cable in an external modulation source via the rear panel's 1/4 Mod Src. jack point, thus making the new Mini even more attractive in terms of its modulation possibilities.

Apart from routing an external audio source into the Minimoog's legendary 24dB per octave filter, one of the most common techniques used by Model D players was to route the output of the synth back into its input to overdrive the signal and create phat amounts of distortion.

In its latest iteration, Moog has normalled this connection for you internally. So with nothing connected to the External Input Signal jack, the audio out is sent back into the Mixer's input. All you have to do is ratchet up the External Input and you'll see that familiar Overload light begin to flicker.

The new Minimoog features a series of Power-On commands, initiated by holding a series of keys while powering up. For example you can now enable legato triggering with the latest version of the synth by holding down a D Minor chord (D3, F3, A3) as you switch the synth on.

In this instance, the Contour Generators are only triggered if all notes have been released. This means that a second note played while a first is still being held will maintain the same Filter and Loudness settings. To turn legato mode off and re-enable multi-triggering (where each note played sends new trigger signals to the Filter and Loudness generators...), hold down a D Major chord (D3, F#3, A3, MIDI) when turning the Minimoog back on.

When Bob Moog and in-house engineer Bill Hemsath created the Minimoog, their hope was that the instrument would serve as a scaled down, affordable entry point into the realm of electronic sound.

The original price of $1,195 ($7,100 in today's money) was a hard ask. Even now you'd have to consider whether it's worth the investment with the sea of synths available today. But if you're after a monophonic keyboard, the answer may well be yes.

The analogue craze notwithstanding, software simulations still pale in one respect or another to lighting up a true beast of an instrument like this. And while it's clear that Moog is trading on its heritage by reissuing this synth in the 21st century, the demand for the sound of the Model D has never really gone away.