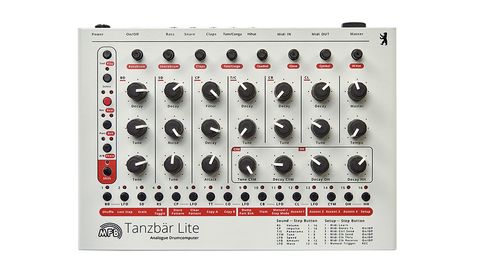 Workflow-wise the Tanzmaus and Tanzbär Lite are pretty flawed, but when they sound this good, we can just about overlook that.

The Tanzmaus and Tanzbär Lite are the latest compact analogue drum machines to reach our shores from MFB.

Broadly speaking, they're a new generation of instrument replacing MFB's discontinued 503 and 522 machines respectively. In a very loose sense, the pair are inspired by Roland's classic TR-808 and TR-909 grooveboxes, but these are far from copycat machines - the similarity only stretches as far as the range of sounds on offer, rather than the machines' sound and functionality.

Visually, both drum machines look completely different from the instruments that preceded them. The 503 was a black plastic box with a sizeable central screen, while the 522 was a red and black plastic device laden with several rows of knobs. Both the Tanzmaus and Tanzbär Lite come in a near identical off-white metal chassis, each equipped with a rectangular bank of 21 rotaries surrounded by click buttons and a row of smaller channel gain knobs along the top.

There are no screens either, just an assortment of parameter labels and a list of hidden parameters in small print down the bottom.

Stylistically, both look really smart, and the metal chassis feels reassuringly rugged. Having said that though, in our tests we noticed a bit of unwanted noise when turning a couple of sound parameter knobs, which makes us slightly less confident about how the build will hold up long term.

As well as sharing a visual style, both drum machines have an almost identical workflow, which in both cases is far from intuitive. Given their passing resemblance to Roland's x0x boxes, qw wrongly assumed that we'd be able to work out how to step sequence a drum pattern based merely on our knowledge of other drum machines and a little guesswork.

In reality, we found myself needing to read the accompanying manual pretty much cover to cover in order to create a beat. In itself, this isn't necessarily a problem - a lot of our favourite hardware instruments we've initially found a little confusing to navigate (step forward all Elektron gear). It has to be said, however, that there's been a few questionable decisions made when designing the interfaces of these drum machines.

The main problem is that - beyond the main sound parameters controlled by the rotaries - pretty much everything requires a Shift press to access. Seriously, even the Play button requires the user to hold down the Shift button to activate it - and having your primary transport control effectively buried as a secondary function is, frankly, baffling.

"Each has its sonic strengths and weaknesses, but they're full of character and both pack a serious punch."

With multiple button presses required to access different modes and input sequences, combined with a fairly clumsy system of LED indicators, you'll regularly wish you had some sort of breadcrumb trail in order to remind yourself what you're currently editing and how you got there. The lack of any sort of screen, tap tempo or labelling on the tempo control is a bit of an annoyance too, meaning that you're either going to need a MIDI input or rely on your own rhythmic guesswork if you want to create beats at a specific bpm.

On the flip side to this, however, there are a number of very useful features to both drum machines. Both feature per-step automation of all the main sound parameters, which can either be recorded in real time or inputted via the step sequencer (both following a cryptic assortment of Shift presses, natch). Both machines feature Last Step and Scale functions that allow users to get creative with pattern lengths and time signatures, and an A/B function allows for two 16-step patterns to be created at once, to be connected or flipped between.

The Chain ability allows up to 16 patterns to be linked together too, in order to create extended sequences or full songs. In terms of memory, both machines have four banks of 16 patterns. Out the box these come pre-loaded with rhythmic patterns, including 16 by Berlin Techno producer Yapacc. Additional patterns can be purchased online too.

There are also four different levels of assignable Accent, for adding emphasis. There's a flexible Flam function too, with 16 different patterns available (and props to the manual for describing a flam as "something a drummer does to make their playing sound more sophisticated, and to attract girlfriends").

There's an onboard Shuffle feature too, for which you use the 16 step buttons to set the intensity. While it's good having the shuffle there, the button system lacks the subtlety of a rotary, and there's a bit of a jump between having a completely straight groove and something with a fairly noticeable swing.

Design wise then, these two instruments are very much a mixed bag, and at this point it would be easy to write them off as a pair of middling beat makers, slap a six out of ten score on them and be done with it.

To do so, however, would be to overlook the fact that both of these drum machines sound fantastic. While each has its sonic strengths and weaknesses, they're packed with character across the board and both pack a serious punch.

The Tanzbär Lite features a stripped-back selection of nine analogue sounds based on those found in MFB's flagship Tanzbär drum machine. These consist of a kick, snare, rimshot, clap, tom/conga, cowbell, clave, cymbal and hi-hat. On the whole, the sounds are of a punchy and minimal variety; there's definitely a heavy x0x influence here, but the Lite has a certain metallic, raw quality that's all its own.

The kick drum has a solid punch with a long, tuneful decay on it. The clap is pleasantly crisp too, while the tom has a very meaty quality that sounds great when tuned down into second kick/bassline territory. The cowbell is a highlight here though, with a lovely raspy quality that sounds great with the decay cranked up and a bit of automation recorded on the tuning.

The only slightly weak sounds here are the hi-hat - which has a lovely metallic sound but only features decay controls and no tuning - and the rimshot, which features just a (hidden) volume control.

The Tanzmaus packs in five analogue drums - kick, snare, rimshot, clap and tom - and a pair of sample tracks. The sound here is grittier and meatier than its Tanzbär counterpart. Each of the two sample sections offers a range of 16 built-in samples with a decay and pitch control.

The samples are a range of fairly lo-fi drum and percussion one- shots, which sound great alongside the analogue drum parts, particularly once pitched up or down and with a little automation thrown in. The kick is a real standout here; as soon as the decay is turned up even a little, it becomes thick and saturated. With a little of the built-in drive thrown in - added via the Tanzmaus' additional 'data' rotary - it sounds beautifully punchy and raw.

Both machines have a fairly specific sound set that's particularly suited to grittier electronic music sounds like underground Techno or Jungle, but for those particular flavours of punchy, raw sound these are two of the best sounding drum machines we've tried.

With its lo-fi samples and beefy kick, the Tanzmaus is my personal favourite; without the need for any effects, it sounds ready to be plugged directly into the desk at Berghain in order to unleash its inner Techno fury. Both machines are a long way from perfect but in the end, despite some pretty significant workflow issues and design flaws, we still really want to own both of these.