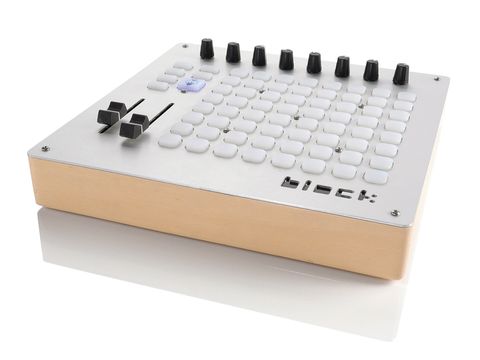 The Block is a well-built, mini alternative to the more mainstream matrix-style controllers.

The grid-based controller field has got crowded: monome, Akai's APC40, Novation's Launchpad... these controllers target Ableton Live users, directly or indirectly, as well as users of more flexible applications such as Max/MSP and Reaktor, and various VJ programs. Add Max for Live to that list, and ideas are rapidly changing about what connections we can build between hardware and software.

The most recent arrival on the scene is the Block. This is the latest in a line of controllers from Livid Instruments in Texas, going back to the Tactic, the VX Rack, and the Ohm (still in production as the Ohm64), and sidetracking into the transparent plastic weird-cool of the Viditar - a video jamming 'guitar'.

More streamlined than the Ohm, Block is a square device which is all about the 64 buttons (all of which are lit by blue LEDs). There's just a handful of other controls: eight knobs, two faders, and seven function buttons (one is a big fat one intended for more dynamic uses like tap tempo).

The top panel is aluminium, and the case is made of jelutong, a lightweight hardwood that used to be a major source of chewing gum, apparently.

The Block scores with its wood and metal loveliness and chunky controls, but we'd prefer the 13 screws in the top panel to be countersunk, especially the ones between the buttons - as things stand, they are intrusive. Also, the knobs don't line up with the grid - as a performer you may find this annoying in a live situation. The device is compact enough, but it is quite deep, and it won't fit in everybody's laptop case.

Block is USB-powered, doesn't need drivers, and ships with MIDI notes and CCs assigned to the controls and buttons. Use it immediately and figure it out later - we like that.

When you're ready to create your own presets, download the free Block Editor app, assign your chosen functions (the 'function' buttons can also send program changes, by the way), and toy with the LEDs. Draw a pattern in the Editor and Block's LEDs follow right along - type a text message, and you can watch it scroll across the display.

Even better, load a QuickTime movie into the Editor and watch as the pads attempt to display it - this works best with simple graphics. It's probably pointless, but a lot of fun.

The Editor source code is available under a GPL licence, and can be edited in Max/MSP.

When we tried Block with Ableton Live, we realised how spoiled we've been by the APC40 and Launchpad - suddenly it's old-school to manually map controls and clip launching! Once you've made the effort to set it up, though, Block works great and is fun to use. The interface is visually clear (apart from those knobs), and there's a quality feel to the thing, which is a big part of what you're paying for. In the default MIDI mode, Block's grid buttons will light to indicate a playing Session View clip.

Next, we downloaded the demo of Arkaos Grand VJ, an app which Livid itself uses in its tutorial movies (Grand VJ has a matrix view which relates very well to the Block layout). Livid's products feel like they're targeting VJs just as much as musicians, and Block will probably suit VJing very well, particularly because it's a discipline where you can be more flexible in the use of knobs and faders.

Like the Ohm 64 it's based on, Block is designed to be as open and customisable as possible, and it can be fully controlled via Max for Live or regular Max/MSP patches. Livid has a free Max for Live step sequencer example which you can download.

In a world of APCs, Launchpads and monomes - and even Livid's own Ohm 64 - it's tough for a new machine to fit in, but Block will reach those people who want a portable, customisable controller with a more 'organic' vibe, and more controls than the monome (but fewer than the APC40).

These days, at this level, it's not about 'better' or 'worse' with controllers - they all have different ways of doing similar things. You'll be choosing based on price, compatibility with your existing gear, maybe a specific hardware feature that you need, and an emotional response generated by which one turns you on when you look at it.

Livid seems to focus on three things: live performance, user customisation, and ethical production. Only you can decide if that means something to you.

Sometimes Block comes across more like something from an art installation than a down 'n' dirty controller, but it's a good looking, functional, and individual piece that will last you a long time.