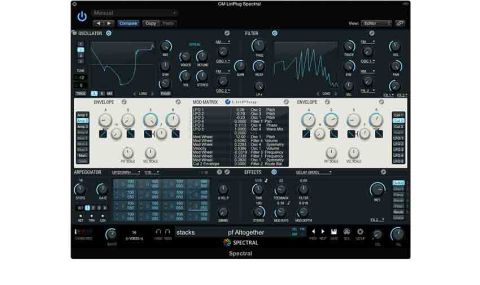 The fun and accessibility of subtractive synthesis meets the power of additive in this beautiful if rather specialist instrument.

While some would say that spectral and additive synthesis are not quite the same thing, the terms are often used interchangably. So what is LinPlug's latest plugin, Spectral (VST/ AU)? Well, it's not an iZotope Iris-style spectral synth but instead one built on an additive architecture, fronted by a subtractive interface, making it easy to use but capable of potentially more interesting sounds than a virtual analogue.

A Spectral patch starts with four oscillator sections, each with its own filter and amp/filter envelopes. Further modulation is on tap in the shape of three more envelopes and five LFOs, assignable in the modulation matrix.

There are also six effects slots with 14 types, from regular Reverb, Delay, Flanger and Chorus to the more creative Gator, Wah-Wah, Filter and Crusher, plus a dedicated Master EQ. A powerful 32-step Arpeggiator with modulation-only mode, and a chord memory finish off the main furnishings.

Each oscillator hosts two waveforms, morphed into each other using the Mix control in order to create a final waveshape.

Each wave is chosen from a library of 65 preset (but fully mix-and-matchable) pairs, including the familiar subtractive tropes, made by loading the same wave into each slot (Sine/Sine, Saw/Saw, etc), but dominated by more creative combos, ranging from the obvious (Pulse/Saw, Saw/ Triangle, etc) to the far more esoteric (Rich Saw/ Saw Bass, DblPulse/Spec Thin, etc). Many of these shapes draw directly on LinPlug's Alpha and MorphoX synths and are named as such.

As well as the waveform Mix knob, each of Spectral's oscillators also allows adjustment of Detune, Stereo spread, Symmetry, Phase and up to six-voice unison. They also each feature two cross-modulation slots, with a choice of three types of modulation - Phase (PM), Amplitude (AM) and Frequency (FM) - sourced from any of the four oscillator or filter outputs.

However, the big gun in Spectral's oscillator arsenal is the Spectral Editor, enabling you to precisely edit 256 harmonics for each wave and blend in other waveforms (see The Spectral/Filter Display).

The filter follows the same conceptual path as the oscillator, with cutoff and resonance augmented by two cross-modulation slots, enabling the filter frequency and resonance to be modulated by a signal sourced from any of the oscillators or filters. There are 57 preset filter shapes available, and again, these are fully editable in a graphical display that lets you shape a curve across 121 filter bands. You really can create any filter shape you like with this, which is obviously a very powerful feature.

As Spectral has no mixer, the filter section is also where the output routing for each oscillator/filter block is specified. You can choose two simultaneous destinations - any of the six effects slots and/or the main output - and mix them with a balance control.

Spectral's oscillator and filter are additively linked, rather than simply chained in series, and oscillator cross modulation can result in harmonics that won't be quelled by the filter. To remedy this (should you wish to), an additional low-pass filter, LP+, is onboard.

Spectral comes with a library of over 850 presets divided up into a broad set of categories. The overarching flavour is very crisp and upfront - bouncy bass sounds, bell-like pads and keys, and even a serviceable set of synthetic drums.

However, the synth is most at home producing evolving and textural sounds, thanks to the easy modulation of the oscillator waveform mix and the cross-modulation options. The majority of presets reside in the various pad, drone, ambient and effects banks, and the excellent arpeggiator and sequence patches also boast some lovely tones of a similarly organic nature.

One brilliant inclusion is the Arpeggiator's 'modulation only' mode, under which its Transpose, Length or Velocity output are used as modulation sources. This really pushes the sound designer towards highly animated textures rather than punchy, "static" sounds - although Spectral can do those too.

All of this additive power comes at a price: significant processing overhead. When editing shapes in the Spectral display, there's a brief delay as the waveform or shape of the oscillator or filter is analysed and applied. It's something you quickly get used to and indicative of the number-crunching going on.

Multi-oscillator patches and high polyphony can be pretty taxing on the host system - but we can't complain about a synth being designed with future CPUs in mind, as long as its sound warrants the DSP expenditure, which, in this case, it does.

Other points of note are that there's no noise generator (although the manual shows how to fake one), and that external audio resynthesis isn't a feature. Also, with no centralised mixer or global filter, balancing oscillators and shaping the overall output is more hassle than it needs to be.

Overall, Spectral probably isn't a synth to be called on for bread and butter sounds, and its high resource usage could vex owners of older computers. But if the idea of hand-designing unique textures right down to the raw oscillator level appeals, with its friendly interface, easy learning curve and superb, characterful sound, Spectral could well be the synth for you.