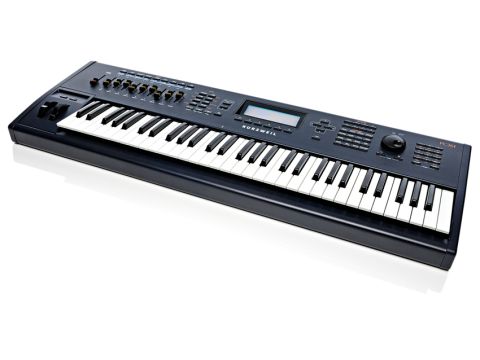 The PC361 is reasonably priced considering its depth, but it's held back by its confusing interface.

Kurzweil is highly regarded in the synth and sampler world. Known for its deep and powerful synth engines and Variable Architecture Synthesis Technology (VAST) it's been producing synths since the early 1980s and has always been at the forefront of sound design technology.

Based on the latest version of VAST, the PC361 is a keyboard that follows the now pretty standard workstation template - coupling sample-based synthesis with virtual analogue synthesis, powerful FX and a sequencer (but no sampling).

Straight out of the box, you'd be forgiven for thinking you'd just purchased a keyboard from the 1990s - the PC361 looks fairly old-fashioned among today's breed of workstations and so, on-stage, it's not really going to turn any heads.

Though this is the most 'portable' version of the PC3X range, (with a 61-note synth action keybed) it's still a heavy beast and once in a case it's even heavier.

The front panel is neatly laid out, though there's still a lot of info to take in. Functionality of the buttons/sliders changes depending on the selected mode, so we'd recommend reading the telephone directory-like manual to familiarise yourself with all the various functions before you start.

"The front panel is neatly laid out, though there's still a lot of info to take in."

In fact, more than for most synths, the manual is essential reading - there's just so much functionality crammed in.

Which brings us onto another point - the display. Compared to some competing workstations, the screen is a nightmare. It's small, hard on the eyes (as there's no colour to highlight different functions) and there's just too much crammed into the space for our liking. It makes negotiating the 'board frustrating, particularly as so much menu diving is required to get the best from this synth. We'd highly recommend using the Soundtower computer editing software for any serious editing tasks.

Thankfully, the keyboard itself is very playable, with a fast and precise yet soft feel. It's easy to play every type of sound from this keybed, though you could of course marry the PC361 with a weighted controller (via MIDI) for getting the best out of the piano-type sounds.

To the left of the PC361 is a set of nine sliders that operate according to the mode selected.

In program mode, the sliders can affect parameters including filter cutoff/resonance, LFO rate, layer volume, envelope parameters and FX control. This is handy for making quick changes to sounds while performing, though it would be great if the screen flashed up with the function you were editing when a slider was moved, as it's easy to forget what function each slider is assigned to. The sliders transmit MIDI CCs too.

"The program architecture is basically similar to other workstations, but soon becomes more complex."

In KB3 mode (which uses free running oscillators to make tonewheel organ sounds) the sliders correspond to the nine drawbars that you would find on a Hammond organ, which works great in practice. Note that when in this mode, no note stealing can occur due to polyphony limits (unlike VAST programs which use intelligent note stealing when maximum polyphony is approached).

The program architecture is basically similar to other workstations, but soon becomes more complex. You start with a sample (mono/stereo) and assign it to a keymap (keyboard zone). These sample keymaps are then assigned to layers (32 layers are possible per program). Layers can cross-modulate each other for complex evolving sounds, while algorithms (similar in concept to those found on a DX7) are used for further processing the sample(s) within these keymaps.

There are 57 algorithms on board. Basically, these are user-programmable circuits that enable you to wire various components together (pitch, amp, LFO, shapers, filters etc) in many configurations, to shape your sound on a very intricate level. It sounds complex, but with a bit of practice (and perhaps some help from the DAW editor and manual) this keyboard has the potential to be a sound designer's dream. Just about any parameter you can imagine can be tweaked in this synth - its sound palette is truly as big as your imagination.

There are over 800 presets onboard, with pretty much every base covered. The category functions help speed up the sound selection process, and there's also a useful quick access mode that enables you to have several sounds at your disposal for live work.

On the whole, the sounds are inspiring. The acoustic pianos and orchestral sounds are über realistic (some of the best we've heard in a workstation and would be amazing for film scoring work), while there are some great analogue-style pads, electric pianos, leads, basses, sound effects and some very useable drum kits (both acoustic and electronic). There really is something here to suit most styles and applications and you really feel that it'll keep you busy for many years.

These effects blend seamlessly with the onboard sounds, while the filters are great too, sounding very juicy and analogue-like.

The onboard sequencer is a useful addition for full arranging and as a scratchpad for getting ideas down. It has basic but useful editing facilities, tight 960 PPQ timing and several quantise options for tightening things up. There's a decent onboard arpeggiator too, which has several modes including played, upwards, downwards, random, shuffle, up/down and walking. It can also glide between notes and sync with external devices.

If you're after one of the most comprehensive and best sounding sound design machines around, then this has to be on the top of your list - just don't expect instant gratification. As a live performance board, it's pretty good too, though the interface is a little impenetrable at times, especially on the fly. Persevere though, and you'll be very impressed with the quality of the end results.

Give some of the PC361's sounds a listen: