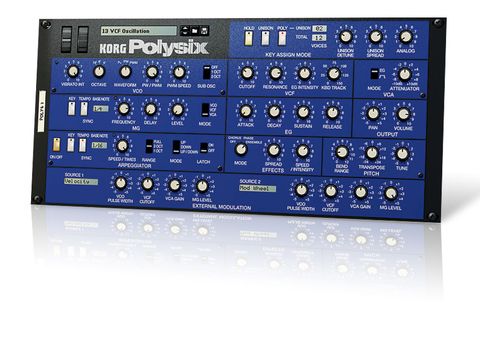 Polysix RE sounds just as good as its superb plug-in sibling and for Reason users looking for a classic synth to add to their arsenal it's worth every penny of its very reasonable asking price.

One of the great analogue synths, the Korg Polysix (launched in 1981) has been around in software form for almost a decade. Now it can also stick a flag in Reason, claiming the title of first official synth emulation in Propellerhead's new Rack Extensions format.

By virtue of its one-screen interface and more sensible layout, the Polysix RE is actually rather easier to use than its existing plug-in counterpart. It loses the plug-in's Chord function and MIDI CC compatibility, but gains a pair of CV inputs round the back, for assigning external control signals to modulate oscillator pulse width, filter cutoff, amp gain and LFO depth.

Of course, the hardware's original six-voice polyphony limit doesn't apply here any more than it did with the plug-in - 32 voices are available, as well as up to 16 unison voices with detune and spread.

Architecturally, the Polysix Rack Extension is as straightforward as analogue synths get. A single oscillator plays host to a choice of saw, pulse and modulatable pulse waves, and can be underpinned with a sub-oscillator that's one or two octaves below.

The oscillator feeds into a low-pass filter and a simple effects unit (with chorus, phaser and ensemble). An ADSR envelope generator enables modulation of level or filter cutoff (yup, one or the other - not both), while a tempo-syncable LFO can be pointed at the oscillator pitch and level, or filter cutoff, and set to retrigger per note or not. A simple arpeggiator completes the picture, with up to two octaves of range and up, down and up/down modes.

More powerful and complex synths are no doubt on the way for the Reason rack, and the Polysix may well end up getting lost in the crowd, but for now, it's a must-have.