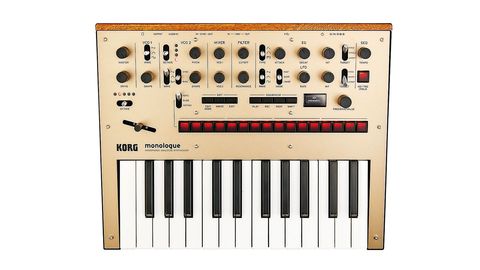 Cheap and cheerful, but powerful, and with a surprising amount of flexibility given its limited envelope section.

Korg's approach over the last few years has taken in recreations of original hardware alongside budget-priced Volca boxes, ultimately arriving at the Minilogue, a newly designed polyphonic analogue design.

The Minilogue tipped a nod to specific older gear, but was very much a 21st century take on things. Korg's latest synth is the Monologue, and as you would expect it's monophonic.

However, it's not just a Minilogue trimmed of three voices. There is a family resemblance - a real wood back panel, mini keys and the same set of inputs and outputs. This time though we have a smaller (and lighter) footprint, with an octave taken off the keyboard and portability enhanced by the possibility of battery power. And, like the Volcas, the box includes some batteries to get you going, but no PSU.

Overall it is a good-looking little synth, with the gold metallic front giving ours a certain amount of 'bling' appeal (there are four other colours available too).

The synth architecture is relatively conventional, with some quite clever functional tricks which extend its range. There are two oscillators, each with three waveforms. Just VCO2 has Octave and Pitch controls this time, and Noise is only available in place of the square wave in VCO2.

Like the Minilogue, both VCOs have a shape control. This allows VCO1's square wave width to be altered and modulated. In the case of the sawtooth and triangle waves the shape control 'folds' the wave, with the result being increased harmonics.

Cross Modulation has been dropped, but there is still the ability to engage oscillator Sync and Ring Modulation in VCO2. This appears to be straight amplitude modulation, as the result still contains the original carrier frequency. Together they open up the possibility of creating harsher or more metallic tones.

The mixer section has independent controls for each VCO, and also allows the injection of external audio signals. After this the audio signals pass into the filter.

The Quick Guide makes no mention of its specification, but audio analysis reveals it to be a two-pole (12dB/octave) design. Twist the Resonance control and it is easy to hear the emphasis point around the cutoff frequency proceed to self-oscillation. Combine this with a suitable key-tracking setting (configured in the Program Edit menu), and you have a third, playable oscillator source. To be honest, we didn't miss the Monologue's four-pole option, though a high-pass and/or band-pass alternative would have been nice to see.

The Monologue includes Korg's Motion Sequencing technology which allows both notes and parameter values to be recorded and played back. The 16-step sequencer is similar to those of Korg's Volcas, with the 16 front-panel LEDs being used for menu item selection and step on/off status. Notes can be recorded in real or step-time modes, and up to four lanes of parameter automation can be added on top.

Unlike the Volcas, the screen means this aspect of the sequencer is a more visual experience. An arpeggiator option, with motion sequencing, would have been the icing on the cake.

There has been a significant amount of functional trimming in the envelope generator (EG) section. In fact, all you now have is a single, two-stage envelope. In two of its modes - one with a sustain stage - it is hard-wired to the VCA, though this can be switched to a basic on/off (gate-style) amp envelope, leaving the main EG free to control filter cutoff or the pitch of each VCO (individually).

Other modulation duties are taken care of by the LFO, which can control the pitch or shape (of both oscillators together) or filter cutoff. The LFO functions over two rate ranges, though dialling up some basic FM synthesis tones in its 'Fast' guise revealed some noticeable parameter stepping on both the Rate and Intensity controls. A nice touch here is the 1-Shot mode that turns the LFO into a second, albeit basic, envelope generator.

The last ingredient in the mix is the Drive circuitry that saturates the output - great for delivering distorted tones, or adding extra depth. This works a treat on percussive sounds.

On the playability front, small keys are never great but a necessary compromise on a portable unit. Unfortunately, the Monologue's pitch/mod slider remains. It's a shame that Korg stuck with this somewhat flimsy, inaccurate design. Arturia got it right on the (even smaller) MicroBrute by keeping 'proper', and separate, pitchbend and mod wheels.

The ability to store presets is very useful, though a manual mode, reflecting the current front-panel settings, would have been useful, as would the addition of some extra knobs for a few of the parameters buried in the menus - filter key tracking, portamento etc.

The upside of the memory and other internal digital control elements is the ease with which notes and parameters can be automated, and Korg goes to town with its Motion Sequencing technology on the Monologue.

It's a shame that an arpeggiator wasn't also included, as in many circumstances these can be more immediately useful than a transposable sequencer. At least the ability to interface with a DAW via MIDI or USB allows this to be done externally, and analogue interfacing fans will appreciate the Sync options.

Arturia's MicroBrute is cheaper but less flexible. The similarly-priced MiniBrute lacks the two independently tunable oscillators, sync, ring-modulation and motion sequencing of the Korg. Ultimately, the Monologue is great little synth that carves its own distinct path through the current, increasingly crowded, analogue terrain.