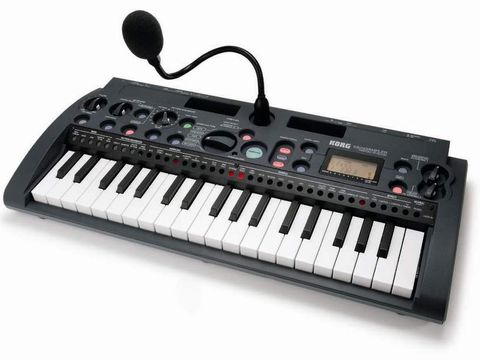 A deceptively simple sampler with some tricks up its sleeve, and a nice little keyboard to boot.

Judging by the runaway success of the microKorg, it seems like the world really was looking for a small synth with a big sound. So what's next? How can Korg take the fun and portable music machine to the next level? By basing a new micro around the free-for-all world of sampling, that's how.

If you're going to do this, it's best to start off with plenty of sampling time - how about over 20 minutes, split over eight user banks? Each bank holds 36 individual samples, all of which can be played live on the 37-note mini keyboard or sequenced. And the onboard pattern sequencer features 16 patterns per bank, and can also be driven from an external source.

The machine has been given the style treatment with a distinctive recessed control panel, cool side arches and a gun-metal/blue plastic body. All in all it's got a bit of a futuristic SH-202 vibe about it, and the fact that it's battery powered adds to its cheeky, go-anywhere character.

It uses the same 37-note mini-keyboard as microKorg XL with blinking red LEDs above every key. All the dials and buttons are sunk in to the moulded bodywork, with chicken head pointers standing a little bit taller than the surface.

It's worth pointing out the pair of recessed inlets topside, which are ideal for your iPod or iPhone (perhaps to sample from?) but as there's no dock connector at the base of these they're equally at home carrying Twiglets or grapes, too. There's also an XLR mic-input in the middle of the front panel.

"It's worth pointing out the pair of recessed inlets topside, which are ideal for your iPod or iPhone."

For programming, you get an LCD display, with a thoughtful power save mode that dims the lighting to make the most of your set of batteries.

On the back we have MIDI In/Out, headphone and line level stereo ins and outs on 1/4-inch jacks plus a little twist stick for setting the recording gain. Finally, there's a USB port which handles communication with the software editor/librarian and doubles as a MIDI interface for the unit.

The machine comes loaded with one bank of onboard sounds stored in ROM. Each bank consists of 36 individual samples, which can be played in two modes - keyboard and sample.

Keyboard mode is for playing polyphonically, and maps one sample over the entire keyboard. Polyphony is decent enough at 14 notes, but this drops to half when using the timestretching mode for the samples.

There's a dedicated dial to choose the sample, and as it rotates the little dots light up above the keys to show the position visually. Speaking of which, there are more buttons to jump between this Keyboard mode and the more enticing sounding Sample.

Sample mode gives you access to all 36 of the samples as singles shots, laid out on an orderly line, one per key. The 37th key opens the audio inputs so these can be used live or as part of a pattern too. There isn't any loading time between samples, but it can take several seconds to load up a new bank.

So far it's all pretty straightforward, so what of the onboard sounds? The ROM bank is loaded up with the typical Korg Electribe stuff: some detuned saw leads, electric pianos, tablas, beatboxes etc. These basically do a good job of showing off the different ways a sample can be manipulated in the machine, but if you're looking for multi-sampled pianos, you'll have better luck with something like Korg's M3.

Sequence-wise, patterns can be anywhere between one and 99 measures long. Each one can consist of up to 16,000 note events, and a bank of 16 patterns can total 64,000 notes between them.

All recordings are done in real-time and with the aid of a metronome. The pattern length needs to be set up first by hitting the edit button and navigating to the pattern menu. While here, you can also set up the auto-quantise value between none, 8ths, 16ths (including triplets for both) and 32nd notes.

The pattern bank ties in with the sample bank enabling you to use any of the 36 individual samples from that bank in the pattern.

One sample can be specified as the 'keyboard' part, which spreads it across the keyboard and allows you to play it polyphonically as a pitched instrument. The rest of the samples can be used as one shots as per their original parameters. Press the Sample button to access this mode, where you can decide whether to loop, reverse or add FX for each sample on the fly.

As mentioned earlier, all patterns are created in real-time. To start, hit either of the Play or Rec buttons once to put microSampler in standby and then press record once more to begin. The pattern will loop round and round and is always in overdub mode.

If you stop and start recording the new take will be combined with the original, allowing you to record layer upon layer. It will auto-quantise as it goes around, and responds well to changes in velocity from the keyboard.

If you make a mistake, it's possible to erase any single note by triggering the key in conjunction with the Enter/ Shift button and if the whole take was rubbish, it can be scrapped entirely by pressing Enter/Shift and then the Rec button. By pressing this combination of keys, you can jump between the two takes and compare them back-to-back.

The Mute function can be used to strip back a complex pattern and built it back up again. Once the Mute button is lit, samples can be dropped in and out of the pattern with one press, which is perfect for jamming live.

Another aspect that's suited to live performance is pattern switching. There are two modes for this, which are edited in the Global parameters section. In Bar Line mode, microSampler will wait until the end of the measure, but in PTRN END it will play the whole pattern before it changes to the next. All in all it helps to keep things moving in tight-sync.

You can capture samples live into the machine through its stereo line input on1/4-inch jacks, or through the XLR mic input on the top panel (microSampler comes with a sturdy goose neck mic).

As expected, the keyboard supports re-sampling while the USB connection hooks you up to the computer and with the help of the software editor it's possible to dump banks to and fro. The big dial in the centre selects the sampling type from the five on offer. These are designed to take the manual labour out of editing process like trimming etc. Choices include loop, one-shot, gate, auto-next and key gate.

Hitting the sampler button once makes it glow orange and opens the input monitor to hear what's coming in. There's a meter to help set the levels accurately, and you can place the digital effects on the input for recording.

With a little bit of practice one could get quite quick at catching sounds and throwing them straight into a sequence without needing to pause at any time. Some jobs do need pausing, but if you set up the sampling time, BPM and use the best sampling type, there shouldn't be any need to stop the music and your performance.

"You can capture samples live into the machine through its stereo line input on1/4-inch jacks, or through the XLR mic input on the top panel."

Recording through the analogue converters is a fairly clean process with no unwanted colouration, just a matter of setting the optimum gains. There's a set of basic editing parameters to control the pitch, length etc.

A basic amp envelope can be used to tailor release and decay settings and a bunch of playback modes, such as timestretch and looping. The looping seems to work well right down to single waveforms for analogue sounds. Everything can be edited in terms of BPM beats, percentage or absolute, so it shouldn't hold up anyone's workflow.

When it's time for a serious amount of sampling, you'll be glad to fire up the software editor. This also doubles as a librarian for crucial backups as your collection expands beyond the capacity of the onboard banks.

Communication comes by way of the USB port, and it's possible to send dumps to and fro consisting of samples, banks, and pattern information. To be honest, we could see ourselves picking the editor over the hardware's two-knob workflow every time in the studio.

All the sample parameters are on one page, which is a speed increase of 100% when it comes to editing, effects, shifting samples around the keyboard spread and changing the order of patterns. For the record, it doesn't support editing of the pattern data, although you can import SMF MIDI files.

There is one effects block available and each sample can be routed to this at the touch of a button. It can also be positioned at the audio inputs so samples can be captured with the effects.

In total there are 21 effects drawn from the Kaoss division, and all the basics are covered including reverb. When not using the editor, the two parameter dials revert to effects control. Every effect can assign two custom parameters to knob duties, but only some of the parameters are available for this.

Fire up the microSampler and see what it can do for you. It doesn't dictate one particular way of working so it's wide open to making itself very useful in loads of scenarios - a plus for most, but potentially a minus for the less daring or creative.

When it comes down to using the many buttons and dials we have mixed opinions. The hardware is well designed and does the job, particularly the illuminated buttons and solid sampling selector dials. On the other hand we found it quite easy to knock the programming dials when using one or the other.

Also, the recessed cavity around the buttons doesn't seem to provide any ergonomic advantages - in fact we like the look of it more than we enjoy the feel of using it.

In weighing up the goods, it's fair to say that this is the hardware sampler for the cut and paste generation. The microSampler contains a basic set of sound mangling tools, so don't expect filters on every individual sound or complex modulation and envelopes.

When timestretching, the artefacts begin to creep in and become very noticeable at an octave. Patterns can only sequence note on/off data, while there's no modulation or effects sequencing.

Overall, the emphasis of the microSampler is to offer a useful keyboard package with a little bit of everything you would need to jam with samples. Given that audio quality is good and the workflow is easy and quick, this is both a fun and reliable tool that can be used as part of a live setup or in the studio.

Listen to just some of the things you can do with the microSampler: