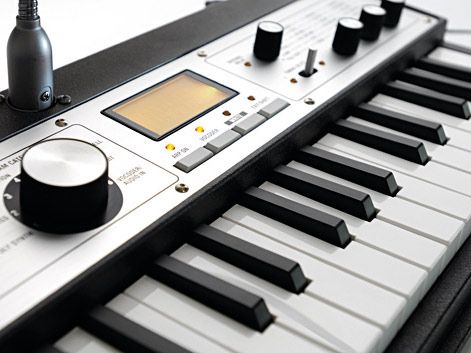 A ﬂexible and great sounding synth that's a worthy addition to the microKorg range.

Seven years is a long time in the world of music technology, and it's testament to the design of the original microKorg that it's still available and very much in demand. According to some sources it is one of the best selling synths of all time.

However, Korg has now seen fit to update the microKorg range with the all-new microKorg XL. It may look different from its little brother (the original isn't being discontinued), but it's cut very much from the same cloth in terms of its target market and internal design ethos.

The original microKorg was far from a perfect beast, but it found its way into many a studio and live setup because of its portability and convenience. But let's not forget its sonics, either - without a decent synth engine it wouldn't still be around.

On opening the box we were surprised to find that microKorg XL - let's call it the mK XL from now on - has a completely different look to its older sibling. Our initial impression was of a shrunken Fender Rhodes electric piano crossed with a school science project (by way of a 1970s Radio Shack 'hi-fi').

Now, this could be very good or very, very bad depending on your taste, but it put a smile on our faces and forced a nod of retro-tinged approval.

Also in the box is a gooseneck microphone that plugs straight into the front-panel XLR. This, luckily, is a substantial and sturdy metal affair with a decent sized mic at the end of the flexible neck. No more messing with cables and pitiful pieces of plastic as on the toy-like mic of the Mk1 - thank you Korg.

The synth is powered by an (included) 9v AC adaptor or 6xAA batteries, for sound on the move. Korg state a battery life of 4 hours with alkaline batteries, which should get you through most train journeys without a problem.

Plugging in the PSU and powering-up brings with it the joy of seeing a backlit LCD display, rather than a basic numerical LED. Below this are four knobs for switching on the Arpeggiator and/or Vocoder, saving your creations and accessing Utility functions.

Taking a quick scan around the rest of the front panel reveals two large Program selection knobs labelled Genre and Category, two small knobs to the left for volume and tempo, and four to the right to take care of editing and performance control.

Besides this there are just three toggle switches for octave up/down, bank select and Timbre selection - more on this later.

Finally, we come to the keyboard, which is of the three-octave mini-key variety. This feels much better than the one on the mK Mk1, and while any reduced size keyboard is a compromise of sorts, it gets the job done.

To the left of the keyboard are the usual pitch bend and modulation wheels.

Round the back there's nothing unusual - individual 1/4" outputs for stereo headphones and Left and Right audio; MIDI In /Out and audio line level input (with a rotary level control). Luckily, this time Korg has included a USB port, which facilitates connection to a host computer for MIDI and editing purposes.

As we write, the editor is still unfinished, but we did manage to get a sneak peek. It's a much improved design compared with the Mk1 software, clearly taking its cues from the recent (and excellent) M50 and M3 XPanded editors.

A real plus here is the ability to import original microKorg and MS2000 programs, making the XL a real jack of all trades. Running the mK XL editor as a plug-in enables you to control your keyboard directly from your DAW.

The mK XL features a conventional yet highly comprehensive synth architecture, with many bits ripped off from Korg's bigger keyboards.

Each Program consists of up to two Timbres (although most of the preset Programs only use one, as polyphony is halved when layering) which are then passed to the two Master FX sections and on to the main output. The arpeggiator, when enabled, can control one or both Timbres with the chosen pattern.

A Timbre can be thought of as the basic synth building block for most sounds. It features two oscillators (one of which can take the Line or Mic Audio In as its input) plus a Noise source that feed into the Mixer section.

Oscillator 1 (OSC1) is fully featured and can choose from a range of basic 'analogue' waveshapes (with cross and phase modulation), a formant generator, plus noise and PCM/DWGS sources (from acoustic samples and digital synths).

OSC2 is a simpler affair, offering only basic waveshapes, but adds sync and ring modulation options to help fatten the sound.

This all then passes to the filter section, which comprises two resonant multi-mode filters that can be configured for serial or parallel processing . There's also a split option for shaping OSC1 and 2 separately.

The filters can be swept from a 24dB/ octave low-pass (LPF) through 12dB/ octave LPF and high-pass (HPF) modes, and on to band-pass and thru (no filtering). One particularly welcome feature is that the filters can be driven into self-oscillation at high resonance settings.

After this comes a drive/ waveshaping processor for adding grit or full-on, balls-out hard-edged distortion which is a key in those spiky nu-rave sounds the original unit became famous for.

Three ADSR envelope generators are available, with the first two pre-assigned to filter and amp contouring duties. Two LFOs are provided; these can be freely assigned using the virtual patch matrix alongside any keyboard and MIDI controller sources.

Timbres can be layered and split or accessed separately via MIDI in Multi mode. Unison mode stacks voices together, with detune for extra 'fatness' and warmth at the expense of reduced polyphony, and Analog Tune adds subtle random changes to emulate 'vintage' oscillator drift.

The two master effect processors take their inspiration (and DSP code) from Korg's Kaoss series. On the original mK the effects were basic modulation and delay-based affairs, with an additional two-band EQ.

The XL now has 17 more-powerful algorithms that take the great sounds from the synth engine to new levels of complexity and power (for such a tiny unassuming machine).

As well as the usual chorus, flange and phase programs, you get compression, filtering, ring modulation, grain shifting, distortion, decimation and a wider selection of delay effects. Most offer a useful range of parameters to tweak and will sync to the current tempo where applicable.

One effect noticeable by its absence is reverb. We understand that decent reverberation algorithms can take up quite a bit of processing power, and a good stereo delay often sounds better on pads, leaving more space in the mix, but it would have been nice to have the choice. Power leads love a flattering reverb pad.

Despite this obvious gaffe the effects in the XL still get a big thumbs-up.

It's immediately obvious that the mK XL is a great sounding box. Of course, presets only tell part of the story of what a keyboard might be capable of, but the set onboard the mK XL shows that this is a synth capable of conjuring up a huge range of analogue-sounding tones as well as some decent 'real' impersonations of pianos (both acoustic and electric), clavs and organs.

This is thanks to an expanded architecture with extra oscillator waveforms for sample playback. The synthesized textures span both conventional analogue and more unusual hybrid creations.

Next stop, the vocoder. We never liked the vocoder and microphone combination of the original mK, and rarely got the results we were looking for without resorting to an external mic and further processing.

Not so the mK XL. This came up trumps first time for us. Playing a simple chord (only four notes max when vocoding I'm afraid) and talking into the mic gives instant pro-quality results. It's responsive, highly playable and sounds great - and that's just the presets!

We're not sure whether it's the vocoder processing itself that has been improved (the XL is now a 16-band type) or just the new microphone design, but the fact is that using the Vocoder with most sounds produces something useable and instantly worthy of recording and using in a track.

So far so good, but delving beyond the presets proves to be a tricky task despite the more detailed LCD screen of the XL. For anything beyond basic tonal shaping it's necessary to access Full Edit mode.

This means using the three small knobs to move between pages, selecting a parameter and adjusting its value. The LCD does give satisfactory visual feedback, but we feel the whole process would have been much easier if the controls had been of the continuous detented type.

Homing in on the right value can be tricky, and we regularly overshot and ended up on the wrong page due to their sensitivity.

Also, the knobs should have a clearer indication of their current position (this might be a problem on stage).

The ability to edit sounds on your computer gets around many of the problems discussed but we feel there has been a missed opportunity here. A few more knobs would have made the process of editing these great sounds easier, but let's not forget that the new system is certainly an improvement on the old one.

We welcome the fact that it's now at least possible to get your hands dirty directly should you need to.

The microKorg XL is a great-sounding and highly playable synth. No-one else makes a synth like this besides Korg.

The only sticking point is the price, as Korg has taken this opportunity to 'enhance' that too. At over £400, the bargain fun element of the mK has been reduced somewhat.

At this price point we would have expected much better polyphony (the XL only has eight notes at best) alongside better multi-timbral capabilities and a reverb effect.

Despite these concerns, we would encourage anyone to at least take the XL for a spin. It's almost impossible not to love.