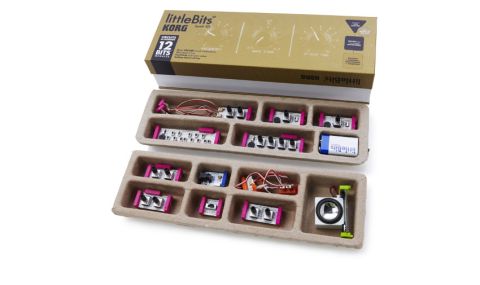 An interesting educational tool, limited in terms of connectivity and sonic scope, but lots of fun.

There seems to be no stopping Korg at the moment, at least in the realm of analogue- flavoured kit. Like most other manufacturers, digital technology has ruled Korg's roost for much of the last three decades and it seemed that its well-regarded analogue synth legacy would remain just that - until the arrival of the small, fun and cheap Monotron a few years ago.

This spawned what has become an onslaught of tech-nerds' sonic delights (most recently the Volcas - a combination of analogue sound generation and digital control). littleBits on the other hand is only a few years old, though in that time has garnered a host of awards for its range of small interconnecting circuit board modules.

All littleBits' modules fall into one of three colour-coded categories - power (blue), input (pink), wire (orange) and output (green). Connections between modules are made automatically when they are placed next to each other (with magnets ensuring they don't move apart too easily).

The existing modules are generally based around simple circuits of only a few onboard components, or just one in the case of something like a toggle switch. Into this colourful 'electronic Lego' universe step Korg, who have teamed-up with littleBits to create the 12-piece Synth Kit. This consists of many of the sound generation and processing building- blocks associated with a basic subtractive synth bundled into a tiered cardboard box with a 35-page booklet.

Taking each Bit module in turn, we start with Power, which connects to the included 9-volt battery, and will usually be the starting point for any circuit as you would expect. Oscillator is capable of generating Square and Saw waves and features Pitch knob alongside a smaller tuning trimmer. Varying the input voltage entering the input (left) side of the module allows pitch to be controlled remotely.Two identical Oscillator modules are provided with the Synth Kit.

Next, we have the Filter, which is apparently based around the Korg's famous MS-20 filter. Again, this is a simple affair, with Cutoff and Peak (resonance) knobs, though there is an additional Frequency In connector, which allows the cutoff to be controlled by another Bit module.

The Envelope Bit is a two-stage modulator with Attack and Decay controls that on first inspection appears to be solely for use as a Voltage Controlled Amplifier (VCA). However, after some playing about we realised it can also be used as a more general modulation source.

For example, it is possible to use it to control the cutoff frequency of the Filter module, in much the same way as most other synths. In fact, on closer inspection it is apparent that the Oscillator modules can also be used for modulation duties in a similar manner to a conventional LFO.

This can be tested by connecting only two Oscillators in series, whereupon the first in the chain modulates the pitch of the second. Dialling-up a low pitch setting on the first Oscillator delivers pitch sweeps and vibrato effects, but moving its frequency upwards nudges things into atonal cross-modulation territory - nasty, but nice.

The small Random module functions as either a white noise or random voltage generator. So, like the two Oscillators, it can be both a sound source and modulator. The final processor/generator block here is Delay, with Time and Feedback controls, though no wet/dry mix. Of course if you want to hear any of your sonic noodling you'll need to plug in the Synth Speaker module, that also features a small loudspeaker and headphone jack.

Sadly, there is no audio input included in the kit, so you will need to buy the microphone Bit if you want to explore the possibilities of processing external audio. Mix and Split modules allow you to explore more complicated configurations, though including two of each of these in the kit would have been more helpful.

The final parts are the Keyboard and Micro Sequencer Bits. The keyboard is a very compact one octave micro-switch device that can also output a trigger pulse besides the varying voltages related to pitch. More fun than actually playing notes can be had in the form of the Micro Sequencer module, which has four variable steps. The sequencer can be externally clocked from an incoming voltage pulse or button press, and there's a trigger output that sends its own voltage trigger with each step.

To plug or not to plug?

Ultimately, although quite basic in synthesis terms, the littleBits Synth Kit is capable of some interesting results, though to get the most out of it you may need to buy other Bits. The booklet is well-written and informative, with lots of background on why, as well as how, you connect the Bits together.

The examples give you plenty of insight into the basics of synthesis, and even go as far as building a Keytar, but beneath this is the reality that this is more about education and simple fun than a cheap way into modular synthesis.

We would argue that many musos may get more from £100 by trying Korg's more self-contained creations such as the Monotrons, Volcas and Monotribe. In publicity terms at least Korg are onto a winner, and littleBits, as a concept, has charm and functionality.