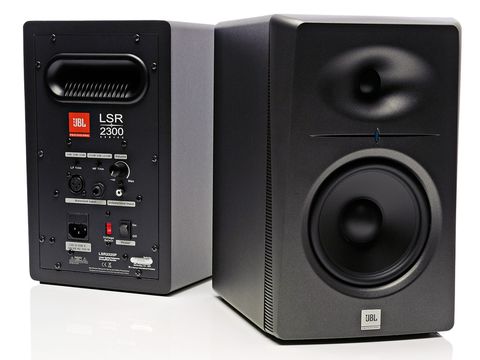 Good near-field monitors that struggle a bit with the low end when the going gets tough.

With so many companies trying to reinvent the wheel with new monitor technology, it's almost refreshing to see a pair which sticks to such a tried and tested formula: bi-amped two-way bass reﬂex design with a soft dome tweeter, a waveguide built in to the front bafﬂe and a rear port. The simple black enclosure has a foam-covered base to provide a bit of isolation and stability.

Round the back, things are exactly as you'd expect. Balanced input is on XLR or 1/4-inch TRS; unbalanced is on RCA. Master volume can be set with a detented pot and a small amount of adjustment comes in the form of two trim switches which allow the low frequencies and high frequencies to be cut or boosted by a ﬁxed amount using a pair of shelf ﬁlters which operate at 120Hz and 7kHz respectively.

Power is delivered by standard kettle lead connection and a recessed switch allows for 115V or 230V operation.

Our ﬁrst test with any new monitors is to set them up according to the manufacturer's recommendations and listen to a few tracks to get a feel for their overall sound. Straight out of the box, the JBLs sounded a bit rough so we left the room and let them play for a couple of hours to warm up.

After this time the harshness had disappeared, so it was probably due to a combination of new drivers and cold amps. The amps themselves are suitably clean class AB devices, based on the cheap but cheerful ST Microelectronics TDA7294 integrated circuits, operating at a maximum of 50W for the woofers and 35W for the tweeters.

First impressions after warm-up are generally positive, with impressive clarity and a relatively ﬂat response. Stereo imaging is good and the sweet spot's easily big enough to work with for near-ﬁeld purposes.

It's clear that bass isn't going to be the strong point of a monitor with a ﬁve-inch driver, but the LSRs put out a healthy amount, albeit with a hint of the low-end fuzziness that you always get with small drivers and ported enclosures.

There's very little sub-bass thump and things occasionally start to get a little messy below 100Hz or so, making it difﬁcult to determine the pitch of bass notes the lower they go.

All this is acceptable considering the design and price. However, the LSR's main problems occur when you try and make them handle too much at once. Busier tracks cause the bottom end to go fuzzy and overwhelm the mid-range. Switching on the -3dB LF shelf ﬁlter improves things but the problem causes a lack of clarity.

Attempting to mix on the 2325s conﬁrmed our suspicions from the listening test. Soloed tracks are reproduced accurately in a revealing manner, but when the same elements are summed and the whole mix is played back, things occasionally start to get messy. It's frustrating that the LSRs can clearly handle everything nicely until the mix gets busier but it's a classic problem with small drivers.

These monitors are capable of producing great results when they like what you're throwing at them, but it's impossible to predict when they'll struggle with more difﬁcult material. Consistency is probably the most important factor when choosing a good pair of monitors, so it's a shame that these good near-ﬁelds are let down.

They're worth a listen, but make sure you compare them to the competition using a wide variety of material.