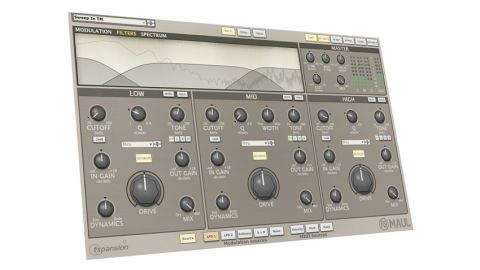 A stunning multiband distortion plugin that epitomises the concept of the creative effects plugin.

Like all recent FXpansion plugins, Maul (VST/ AU/RTAS) isn't your average, everyday distortion plugin, and as a result, it takes a certain amount of head-scratching before you can take full advantage of its extraordinary potential.

Equally challenging will be expressing its full potential in our review, but take it from us: Maul holds a lot of magic for the adventurous sonic sorcerer.

Fundamentally, it's a three-band (Low, Mid and High) distortion plugin, with each band limited by its own filters (high-pass, band-pass and low-pass, respectively), which by default run in parallel but can also be used serially (one after the other) or in straight-up single-band mode.

Throw in five modulation sources (two LFOs, an envelope follower, sample and hold, and noise) and external MIDI modulation that can be applied to pretty much all of Maul's knobs using FXpansion's excellent TransMod system, and you have a seriously flexible plugin.

Each of the three drive stages features input and output level knobs to control the amount of gain, and using these in conjunction with the main Drive knob gives you precise control over the amount of distortion.

There are 32 distortion algorithms on tap to determine the character of the sound, modelled on a range of different technologies: analogue tubes, diodes and transistors, extreme ring modulation, clipping, etc.

After that, a Saturation knob, when applied, further squashes the signal, with the amount of saturation dependent on the input gain setting.

For even more shaping, the Dynamics knob controls a simple but effective transient shaper. Turn it clockwise towards 'Body' and the decay portion of any signal is exaggerated, while turned anti-clockwise, towards 'Bite', the attack portion is brought out.

This can really enhance the sinuous 'suck and blow' sound of driven loops, particularly down at the bottom end.

The main filters are situated before the Drive stages and have the usual Cutoff and Q (resonance) controls, and a switchable slope between 12 and 24dB/octave. A further filter, positioned after the Drive stage, called Tone, is simply a switchable HP/BP/LP model with Cutoff as its only control. Finally, each band boasts its own wet/dry mix control, for multiband parallel processing.

Adding modulation, takes the whole thing to another level entirely. And a solo and mute button on each band makes life easier for the sound designer.

The versatility of all these ingredients results in an incredibly creative setup, and to get you started there are over 70 categorised presets for processing drums, vocals, basses, synths, etc. The sound and variety of tonal and rhythmic possibilities are jaw-dropping.

On the slightly negative side, while the distortions themselves are very pure and mostly great, some can be over-abrasive. To that end, a range of 'cabinet' options to help bed the sound in would have been good. Yes, even with such a staggering range of possibilities on offer, there's always room for more!

Maul is a highly involved plugin that can produce a vast array of dynamic distortion tones with awesome real-time control features. It's not one for the faint of heart, but it's ideal for anyone serious about tonal colouring, sculpting and sound design.