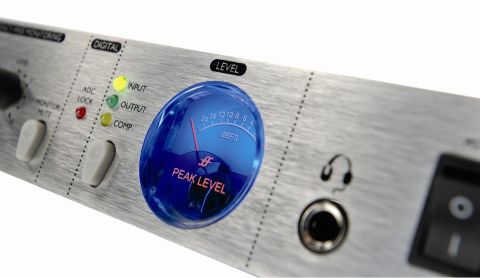 A high quality mono channel strip with in-built latency-free monitoring, and a sound that's way too good for the price.

The TrakMaster Pro is a channel strip equipped to offer 'latency free monitoring' and basic monitor controls, arguably making it possible for the unit to be the hub of a simple studio set-up.

Those of you who spend an eternity pulling speaker plugs in and out whenever you want to use a microphone may want to pay special attention here.

Your monitors can also be plugged into the back of the TrakMaster Pro. You could then plug in a mic, do some basic EQ, add compression and listen via headphones to a good balance of the mic and the mix.

Your vocal sails onto the hard drive without you having to worry about a latent/delayed signal coming back from your software. You finish recording, un-mute the monitors and enjoy the results - simple.

The TrakMaster Pro shares the same textured silver fascia as the rest of the Platinum range of products.

It's a 1U rack and its standout feature is an aquatic looking single blue, circular peak meter on the right hand side.

Moving from left to right we have a female XLR microphone input with a phantom power button, and a low impedance button which, to cut a long story short, offers an alternate tonal option for microphone input - quite unusual to see that on a unit of this price bracket.

Next we have the line input section with a 1/4-inch jack socket switchable between Line and Inst, and happy to receive both balanced and unbalanced signal.

To the right is a knob for the pre-amp level, followed by a high-pass filter button to knock out the subs and rumbles. In fact, there's almost everything you could wish to see in a pre-amp (no phase reverse, though).

The EQ section is far less flexible, offering two fixed levels of attenuation (or cut) between 120Hz and 2kHz, and is described by Focusrite as a 'problem solving' EQ.

Next along comes the compressor. A Threshold knob decides when compression kicks in, the 'Comp Slow Attack' button offers a longer attack time, the Squash button ups the ratio from 5:1 to 35:1 and turns the compressor into more of a limiter.

Either way, there's a make-up gain knob to ensure a sensible output level, even on highly compressed sounds.

Next along is the monitoring section where the listening balance between input signal and backing track is decided.

The digital section is simply a red LED to tell you if you have digital clock sync or not.

That lovely blue meter has a button to toggle between input, output and compression gain reduction and thankfully the headphone socket and power switch are both on the front too.

Round the back are two line out jacks, unbalanced at -10dB, plus balanced at +4dB. Two more pairs of balanced jack deal with monitor input and monitor output. Power is on a weird three-pin screw connector and external supply.

In the rack, the TrakMaster Pro is simplicity itself to use. The pre-amp section delivers the same noiseless and rich sound as the TwinTrak Pro.

We'd have favoured a phase reverse button instead of the impedance selector. It would be more practical when recording a drum kit or using the TrakMaster as a mix effect perhaps, but this unit is primarily aimed at project studio, single mic applications where phase isn't so much an issue.

The EQ is limited but effective, for taking a bit of boom out of a close mic vocal, for example. Most of the time I left it off, which says good things about the mic amp.

The compressor is very useable, especially on vocals. It's capable of very fast attack times, and I could make any sound sit pretty well in my mix while recording.

The Squash limiter function is like turning on an entirely different compressor, and is particularly good on bass sounds.

The monitor section works brilliantly. So often there's not enough welly for a vibey headphone mix.

In this case the TrakMaster delivers a loud clear mix with easy control of the whole balance, making it easy and fun to record a vocal - which, overall, is no mean feat.

The TrakMaster represents incredible value for money. It does it's job brilliantly and will add quality and improved workflow to the simplest of budget set-ups.

The latency free monitoring will be a revelation to anyone working with a basic soundcard set-up, but its mic amp and compressor are good and characterful enough to see the TrakMaster earning a home in all levels of studio.