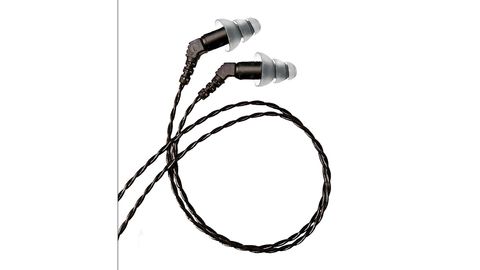 Etymotic's famous 'Christmas tree' earplugs slide snugly into the ear canal and, once pushed into place, deliver some of the best bass you can buy in-ear.

The process isn't exactly instant, or particularly comfortable for some, but the moment they're 'right' and the bass appears from nowhere it's a revelation. And their ability to isolate and cut out the outside world is second to none.

Most popular are their hf3 'iPhone' option which feature an in-line mic and buttons. This new ER-4 is altogether more serious with a very long, very sturdy, twisted cable and a new flatter reference grade response that makes mixing in-ears a reality.

Highs are super bright and crisp with mid and low far less scooped than the bass-friendly hf3. This means a less 'exciting' but far more trustworthy soundstage for those that require reference grade in a tiny, sleek and serious package.