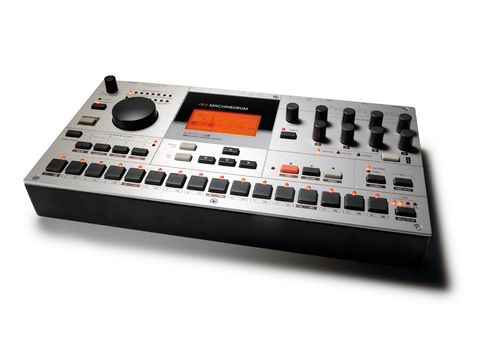 A versatile and super-deep drum synth/sequencer. Its scope is huge and it's worth its high price.

Swedish company Elektron has a great reputation when it comes to making drum machines. Hand-built and with a solid and heavy sound, previous incarnations of the Machinedrum have a loyal following among beat-makers and producers alike.

This latest Machinedrum - couldn't Elektron have come up with a punchier name than the SPS-1UW mk2? - is a subtle evolution of the previous model.

Build quality is solid; the unit is weighty and suitable for both stage and studio use, offering a brushed aluminium top and rack-mountable steel case. Audio outputs include a main stereo output, along with four further individual outs for sending specific sounds in a kit to your DAW or mixer for processing.

There are also two audio ins for sending audio through the effects and for sampling, plus MIDI In, Out and Thru, a headphone out and a 6-volt 'wall wart' universal power connector.

It's a shame that the headphone adapter isn't front-mounted and that there's no USB port for sample transfer - currently this is done over MIDI. However, Elektron is kindly providing a super-fast MIDI interface in the box for speeding up sample transfer.

Sound-wise, the Machinedrum is unique and definitely up there with the best drum machines ever made, though sample memory is still low at 2.5MB. This may seem a little stingy initially, but it forces you to think more about quality than quantity. At this price point though, a little more memory would still be welcome.

The interface is initially hard to get to grips with but gets much easier over time. The manual is very well written, which is a good job as you'll be referring back to it quite a lot. Also, though the red display looks nice, it can be hard to read at times and crams a lot of info into a small space - maybe a white backlight would be easier on the eyes.

The basic sound-hierarchy in the Machinedrum runs like this. There are four main types of MD percussion synths: TRX deals with Roland-style drum sounds (such as those found in the 808 and 909 machines); EFM is an FM-based drum synth, (great for metallic and chaotic sounds); E12 is based on samples taken from the E-MU SP-12/1200 12-bit sampler; and the PI synth deals with physically-modelled sounds (for realistic acoustic drums).

Finally, there's the GND synth that deals with noises, an INP machine for effecting the inputs (envelope follower plus gate) and MIDI/Control machines for controlling/sequencing external MIDI gear and internal parameters.

The percussion synths all sound punchy, realistic when appropriate and are highly useable for many different styles.

Within each MD master synth are separate 'machines' for creating kicks, snares, claps, hats, claves, bass and more. These can be assembled into kits and correspond to each of the sequencer's 16 tracks.

Parameters can include filtering, sample rate variation, LFOs (per track), attack, distortions and much much more. This is the deepest drum machine we've ever laid hands on!

The sequencer has grid/step (a la Roland TR-808) and real-time modes. Each of the square plastic pads on the bottom represents one of 16 sequencer tracks that in turn corresponds to a type of machine (kick, snare, hat for example).

Pattern mode enables the creation of 64-step chainable patterns, while Song mode enables you to arrange these patterns into a full track or your final drum arrangement.

The function button accesses several sequence-shaping parameters such as velocity-accents, muting, swing (which has a very nice feel) and slide, which creates a smooth slide between two parameter values instead of an abrupt jump.

This works great in conjunction with the parameter locks extended mode that locks a specific parameter to a specific sound in a pattern, making sonically evolving patterns very easy to create.

The Machinedrum sounds stunning and though some may complain about 12-bit only operation, we love the sound it produces (many love the Akai MPC 60 and E-MU SP-1200 for the same reason). All the sounds are characterful, upfront-sounding, punchy and very useable and the sound palette is vast, particularly when including your own samples or loops.

If you want a fully-featured and unique sounding/feeling drum machine then you've got to check out the Machinedrum SPS-1UW mk2. It has the power to inspire and should provide many years of deep and enjoyable beat making.

Listen to the Machinedrum SPS-1 UW mk2 in action: