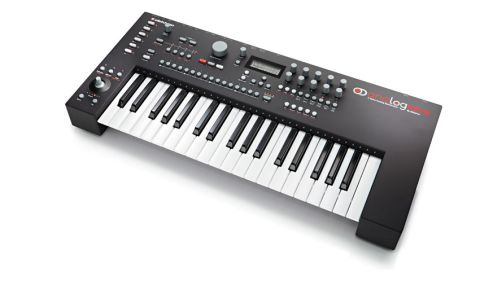 A system capable of great results, though perhaps held back by some ease-of-use issues.

The music technology nerds at Swedish firm Elektron have been making interesting pieces of hardware for nearly 15 years now, and this sees little sign of abating. The Analog Keys is very much a sister product to the Elektron Analog Four synthesizer/ sequencer that appeared last year.

Once again it is based around four discrete analogue synthesizer elements. Each one has two main DCO (Digitally Controlled Oscillators) with multiple waveshapes. Each of these then has a Sub Oscillator and dedicated PWM (Pulse Width Modulation) LFO.

The two DCOs can be Synced and Cross Modulated - Amplitude Modulation here helps create dirtier or more atonal sounds. A noise generator and vibrato LFO each with their own fade envelope are added to the mix.

All this is then fed into a 24dB/octave resonant low-pass filter, overdrive section and then a tamer, but more versatile 12dB/octave multimode filter. The filter section shares a single envelope, though there is an additional envelope, besides that used for amplitude shaping, which can be routed to a range of destinations. You also get two freely routable LFOs.

The signal path from the oscillators to the audio outputs is completely analogue, and the external inputs can be routed in right at the start of the chain. However, the noise generator is digital; envelopes and LFOs are all digitally generated. Some purists may balk, but it does offer potentially more scope than 'pure' analogue voltage control - for example the envelopes offer a range of different linear and exponential curve shapes.

Each voice can then be panned and routed to its own rear-panel stereo output and the main mix outputs. There are three send effects that can be utilised here as well - chorus, delay and reverb. These are relatively basic in editing terms, but do sound good, and can really help finesse and gel the overall result.

It is tempting to compare the synth section of the Analog Keys to that of another modern design such as the DSI Tetra, and there are certainly many similarities in their architecture (and even sound), though the monophonic DSI Evolver is perhaps a closer match, or the more recent Waldorf Pulse 2. In sonic terms at least the Elektron has the edge, though it is still very much in the modern analogue bracket.

As with most other Elektron products, the underlying sound generator is tied closely to the sequencing and real-time manipulation capabilities of the product as a whole. Here we get a similar feature set to the Analog Four, with real and step-time sequencing available across the four synth tracks and two others dedicated to CV control (see opposite) and FX.

Each Project consists of Songs, Banks, Patterns, Chains, Kits, Globals and a Sound Pool. Each Kit is a set-up of four sounds, CV and FX settings. Clear? This is perhaps the biggest hurdle to new users of the Analog Keys - the structural lingo. This does take some getting used to, and feels like a bit of a 1988 time-warp to us, though this is perhaps an inevitable flip-side to hardware sequencing flexibility.

However, recording, playing and editing patterns is quite straightforward once you get stuck in, though reading the manual is essential here as front-panel labelling is not always clear, and multiple functions per button are profuse. One thing we particularly enjoyed is the ability to add live tweaking of the synth's parameters to each step of a pattern, though we think Korg does this somewhat better with its Motion Sequencing concept (seen most recently on the Volca range).

One big omission is the inability to sequence external MIDI gear via the MIDI out. It would be a simple matter to implement this, so it may yet appear in an OS update. The latest update added true polyphony for synth tracks. Conversely the built-in synth elements are well covered in the external MIDI control stakes by the huge number of NRPN controller assignments.

 Much is made of the Analog Keys' performance-related features. Live triggering of patterns from the keyboard in Multi Map mode and a Performance mode, where ten parameter macros allow you to control several track parameters at once by turning a single knob, certainly help with this.

The keyboard, like the unit, appears well-made though the joystick feels a little insubstantial - but this may be a question of taste. As to the question of whether it is worth gaining these for a £350 premium over the price of the Analog Four, this is something you will need to weigh up based on your own possible usage scenario. Certainly, nigh on £1.5k is not an insignificant sum.

As we have found with other Elektron units in the past, the learning curve to get the most of the Analog Keys hardware is quite steep in places. While there are many areas of apparent creative freedom and flexibility, there are other aspects that frustrate.

Not least of these in this case is the size of the LCD screen. We can't help feel that in this age of widespread touchscreen tablet usage a trick has been missed here. On some recent synths this is balanced by the profusion of knobs and buttons available for editing, but this is also lacking in the Elektron (as is the ability to sequence external MIDI gear).

This isn't to say that the Analog Keys is a bad product - it has a decent synth engine under the hood, some interesting interfacing options, and is capable of some great results in sonic terms - but it does require you to submit to the 'Elektron Way'. For believers we're sure that future is rosy, but don't expect instant gratification.