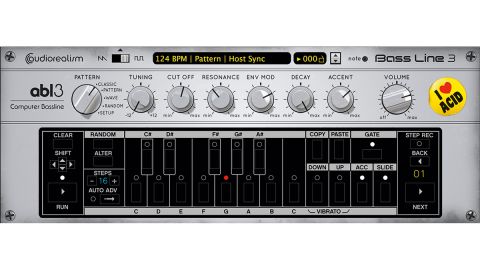 One of the best TB-303 emulations money can buy becomes the best by some margin. Your move, rest of the industry

One of the most revered Roland TB-303 emulations around, Swedish developer AudioRealism's Bass Line has been teetering on the brink of version 3 for two years.

Now, at last, ABL3 (VST/AU) is with us, and it looks to be quite a leap forward.

With the essential sound-shaping controls at the top still, of course, mirroring those of the real thing, it's in the pattern editing department (and improved emulation algorithms) that ABL3 most obviously improves on its predecessor.

Most virtual 303s only offer a recreation of the original hardware sequencer (plus MIDI input for use in your DAW), but as anybody who's tried it knows, the classic 303 sequencer is no fun to program. So instead, ABL3 offers four pattern editors, selected - slightly awkwardly - using the Pattern Mode knob.

You can work entirely in one, according to preference, or flip between them to play to the strengths of each while programming different pattern elements.

First, the Classic sequencer mode - that being the one that works like the real thing - gets a turbo charge. Activating both the Up and Down buttons for a step gives a nice vibrato effect, and there are now Shift buttons for offsetting the entire sequence step-by-step left or right, and up or down in semitones. These functions were previously accessed via a menu, so the transition to buttons is very welcome indeed.

Pattern mode displays up to 16 steps of your sequence (which can comprise up to 64) and their settings at once. Note pitches can be changed either by dragging up and down, or by opening the Slider view, which displays a vertical pitch slider for each step.

You can even Shift-click to select and drag multiple sliders at once. Below are activation lanes for Gate, Up, Down, Accent and Slide. Programming meaningful 303 lines has never been easier...

...Except in Wave mode, which is an audio analyser for converting audio files into 303 sequences. It's been around since ABL2, and if it sounds too good to be true, rest assured it isn't.

Not quite as consistently brilliant as Pattern and Wave modes, but no less creative and welcome, is the new Random Generator, enabling random pattern creation within a framework of definable parameters (note range, root scale and the amount of Accent, Gate or Slide, for example).

Once you've programmed or edited your pattern in one or more modes, it's then incredibly easy to save patterns, and copy and paste them between presets.

The last option on the Pattern Mode knob is Setup mode, with which various aspects of the synth itself can be tweaked. VCO Mode offers a choice of three oscillator models: 1 is fairly polite; 2 is designed to match the real thing as closely as possible (which it certainly does); and 3 is a crunchier version of 2 with a little less low end, for maximum acid squelch.

Then there are buttons for engaging and disengaging Vibrato, VCA clicks (for extra attack), VCA Noise (emulating the sound of a real 303's VCA gate opening and closing), Host Sync/MIDI Trigger, Note Mode (whether incoming notes trigger the synth or switch between the 128 storable patterns), and Show Sticker (the novelty of the smiley and slogan on the GUI wears off rather quickly).

Finally in Setup mode, four knobs facilitate modification of the fundamental sound of ABL3. Reso Trim changes the maximum level of the resonance control; Gate Trim controls the VCA release time for authentic, looser or tighter play; Detune does what it says on the tin, but only with the internal sequencer; and Low Cut cuts or boosts the bass end, responding noticeably differently with each of the three VCO models.

Also in this window is a cool vector-graphic display that responds (in ways that aren't explained in the manual) as you adjust ABL3's many synth controls. Apart from filling us with nostalgia for classic 80s vector videogames, it serves no meaningful purpose.

Beyond its exemplary core functionality, there are plenty of great 'secondary' touches to ABL3, too. For example, you can load and export from and to the Reason Rack Extension version of the synth, import technoBox2 and Rebirth patterns, send MIDI out from ABL3's sequencer (albeit only with the VST version in Ableton Live), Step record patterns via MIDI, and resize the GUI (although, sadly, you can't display more than one pattern programmer mode at a time). Worth noting, however, is that ABL2's built-in distortion has, for some reason, been dropped for v3.

It was already one of the best loved 303 emulations on the market, but ABL3 blows the competition (including ABL2) out of the water in almost every respect. It sounds better, is immeasurably easier to use and looks gorgeous.