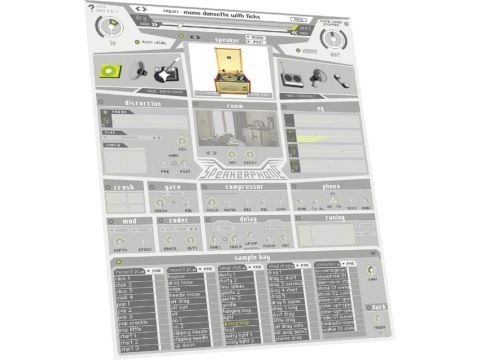 Speakerphone is a truly remarkable plug-in that's sure to find a place in studios everywhere.

Ever wondered how your vocalist would sound through a record player from the 1950s? Or how about taking your MC, setting him down town on a busy New York sidewalk, getting him to rap into his mobile phone and recording it all from the safety of your studio in Newcastle upon Tyne?

Both of these scenarios could be set up if you have the money and perseverance, but in reality they're more trouble than they're worth. Most producers attempt to simulate these real-world effects using EQs, distortion and compression and then hope for the best.

Speakerphone offers an alternative solution. Based around Altiverb, Audioease's world-class convolution reverb plug-in, this includes a convolution engine that uses impulse responses (IRs) from hundreds of speakers - from walkie-talkies to Marshall stacks and way, way beyond. Intrigued yet?

IRs are accessed using a simple pop-up menu in the middle of Speakerphone's interface window and they sound superb - there's no other word for it. Our favourites include the Jobophone record deck from the 1950s, a Bang & Olufsen hi-fi from the 1980s, a Mac laptop from the 1990s and a classic Marshall stack. Every IR comes with a corresponding photograph of the equipment used to create it.

Speakerphone also offers a large number of effects that enable you to add some extra versatility to its speaker sounds. We have a simple EQ, modulation effects such as chorus and phaser, a word length and sample rate reducer, a gate to attenuate low signal levels, a compressor and a delay unit.

More interesting are the codec, phono and tuning effects. Codec simulates the sound of the data compression used by mobile phones. It's extremely convincing and reveals just how bad our mobiles sound!

Phono adds ticks, wow and bumps to your sound, while tuning simulates the various effects of a radio receiver. Expect to hear these effects all over 2008's biggest hits.

No convolution plug-in would be complete without a reverb section, and Speakerphone doesn't disappoint in this department. There are IRs from a large number of spaces - from the cockpit of a MiG fighterplane to a Lexicon reverb that you can add to your setup.

Speakerphone also includes a huge sample library of ambient sounds and atmospheres. These cover many scenarios, from the background sound of an airport terminal (never a great place to be), to the shriek of a megaphone feeding back on itself (never a great thing to hear). These can be played from within Speakerphone, or you can drag and drop the samples from the plug-in into your DAW.

We can see Speakerphone becoming a must-have product for any special effects department but it also has potential for music producers. There's just so much scope here for sound design - this is a plug-in that any programmer who's living on the more experimental edge of music will appreciate.