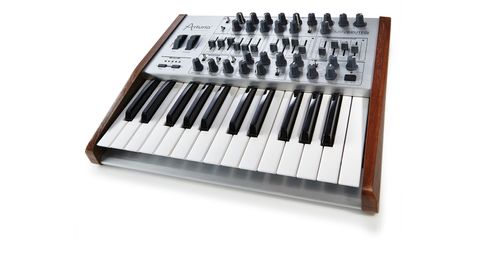 Despite some aesthetic annoyances this remains a great little synth and still packs plenty of punch.

Less than a year ago Arturia introduced the world to the shrunken sibling of the MiniBrute, their first foray into true analogue synthesis.

The trimmed-down MicroBrute was still based around a multi-waveform, single oscillator design, but reduced the available hard-wired modulation options, and provided step-sequencing capabilities instead of the original's arpeggiator. Since then, commentators have been wondering what's going to come next - more oscillators, greater polyphony, a MaxiBrute or PolyBrute?

The answer is now here, in the form of the MiniBrute SE. Now usually, in the software world at least, an SE designation indicates a 'special' feature-limited version of the full package. But for Arturia at least this new synth comes as a premium 'special edition' version.

However, it could equally be labelled a 'Silver Edition' as the most noticeable aspect of the new synth is its brushed aluminium front panel and wooden end cheeks - more on these later.

Let's have a recap on what exactly the MiniBrute offers in terms of sound generation and control. In a similar manner to Roland's classic SH-101 monosynth, at its core the MiniBrute is technically a single VCO (Voltage Controlled Oscillator) design.

In order to be considered a true dual (or triple etc) oscillator synth, the oscillators themselves must offer the possibility of being individually tuned; and, despite the flexibility offered by the MiniBrute with its multiple simultaneous waveforms, there is only one tuning control here - all of the wave shapes are linked in terms of frequency.

However, this doesn't tell the full story. The Mini allows you to mix three waveforms simultaneously - sawtooth, square and triangle - as well as a sub-oscillator (switchable between square and sine waves) one or two octaves below.

Where the synth really shines is when it comes to wave-shaping. Each of the main waveforms can be modulated extensively. The saw becomes an 'ultrasaw' (much like a doubling effect), with separate knobs to control both the amount and rate. The square's pulse width can be set manually, or controlled by the filter envelope or main LFO.

The triangle wave is perhaps most extreme, with its ability to be mangled by the Metalizer control. Again, the amount is adjustable manually or from both the envelope or LFO. All the waveform levels and the separate noise source are mixed using a set of six faders.

Unlike the MicroBrute, the Mini has four-stage envelopes for both filter and amplitude, though as we've already seen, the filter envelope is also pressed into service for wave shape modulation duties when required.

Although, when we reviewed the original MiniBrute, we had few complaints at the time, in retrospect it perhaps would have been nice to see some form of pitch envelope (even just consisting of two stages).

The front panel is already quite busy, but this could have been facilitated by using knobs instead of sliders in the mixer section. In its absence the LFO can be used to achieve basic pitch sweeps. However, to get this working you need to set the LFO to re-trigger with each key press, and this is only possible via USB from the editor software - revealing another of the possible shortcomings of Arturia's 'no screen, one-knob-per-parameter' hardwired approach.

However, this is perhaps a little unfair as one could argue that the editor generally provides extra functionality rather than being a cost-saving shortcut.

The filter section has always been the primary calling-card of all the Brutes and we respect Arturia for making the choice of this relatively little-used multimode filter topology and sticking to it. It can range from smooth to dirty and responds well to higher resonance settings, particularly when the Brute Factor control is pushed up.

There is one significant functional change in the SE, and that is the replacing of the original's arpeggiator with a multi-pattern sequencer (that takes its cue from that in the MicroBrute).

Compared to the Micro, the sequencer here can make use of greater front-panel space, moving some editor-only settings such as Gate Length under direct control, and adding the ability to play the user-recordable patterns in a variety of ways.

We can't help feeling that Arturia has missed a trick here though by completely removing the arpeggiator. Personally we would have been happy to see one less pattern memory in return for a basic arp - though in our book, given the choice, the sequencer is more useful.

It was nice to be reminded how good the MiniBrute sounds, although it should be noted that its timbral palette is still limited in some respects by its lack of detunable oscillators. For example, unlike Novation's Bass Station II and other two-oscillator synths, you cannot produce oscillator sync effects.

The one major disappointment is not related to the sound itself, but is rather a cosmetic/aesthetic concern. The so-called wooden side-panels with their luxurious varnished wood grain appearance are not all they seem.

In fact the wood grain effect is just printed onto (what appears to be) some reconstituted wood-like material. We'd rather Arturia hadn't bothered. We suspect also that after a bit of wear-and-tear they will look decidedly ropey. Shame.

All things considered the MiniBrute remains a great synth, albeit one in an increasingly competitive environment. Whether the SE is right for you is tricky to sum up in a few words. It sounds great, it has plenty of connectivity options, and the sequencer is flexible and fun.

Arturia has stuck to its original formula, which is no bad thing. All that remains is for you to decide if it is what you need.