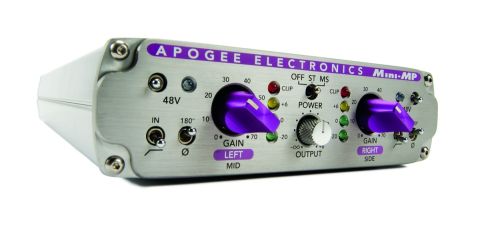 This Mini augments the range to provide an excellent stereo recording solution.

Whether you are looking for eight-channel interfacing to your Pro Tools rig, or a clocking solution for your digital signals, they have an answer.

In 2003, they released the Mini-Me, which combined Apogee's high quality signal converters, their world-famous mic-pres and compression on both channels of one compact package.

Then came the Mini-DAC, which performed a host of digital routing options, and allowed for direct connectivity to computers.

So where does the Mini-MP fit in? Well, the principle concern of this third 'Mini' is to present the user with high-quality, true stereo recording.

The box itself closely resembles the other Minis. At the front, two prominent purple knobs provide up to a whopping 70dB of gain per channel.

Each channel also features an 18dB per octave high-pass filter below 80Hz, a switch to reverse polarity and a toggle to enable 48V of phantom power.

A neat feature here, to ensure phantom power isn't enabled inadvertently, is that the switch needs 'holding' for a second, before an LED indicates its presence.

A single knob controls output and allows an additional 6dB of volume to be added so, alongside the gains, it's no problem to get a decent level out of this box.

Above the output knob, however, lies the Mini-MP's main trick.

Upon powering up, you select one of two modes, either 'ST', for standard stereo operation, or 'MS' for Apogee's 'Middle-Side' recording option, which allows control over the width of the stereo image you record.

Stereo recording is by no means as simple as slinging up a pair of mics, connecting them to two channels of your audio interface and hitting record.

Myriad microphone options are available to engineers, but many contain pitfalls and crucially, different media might require bespoke stereo requirements from the same recording.

For example, a piano piece might need full width for CD release, but a compromised stereo field for radio and TV broadcasts.

This is where 'MS' mode comes into play, as it allows you to configure what Apogee call the 'MS Microphone Array'.

This consists of two microphones, one with a cardioid pattern and one in figure-of-eight mode, connected to the Mini-MP's inputs.

The signals then pass through Apogee's internal 'Decoding Matrix', which allows adjustment to the width of the stereo image.

This means that you could use the Mini-MP twice whilst producing recordings.

First, you could record in 'standard' stereo, and then use the Mini-MP a second time as a post-production tool to restrict the stereo width of subsequent mixes.

Apogee promise that the Decoding Matrix maintains perfect phasing between the channels and we detected no problems with this in tests.

The Mini-MP brings an intelligent device to the increasingly attractive Mini range.

As a group, these boxes now cover sufficient bases to create a quality recording set-up in a minimum of space.

As you would expect from Apogee, the mic-pres are of the highest order and 'MS' mode removes a lot of hassle from stereo recording.

Indeed, such are the charms on offer here, we suspect that the Mini-MP will attract the attention of producers, broadcasters and mastering engineers alike.