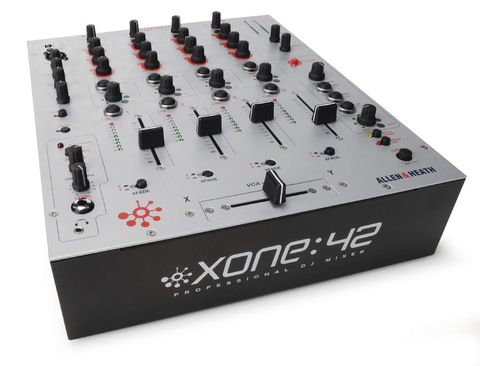 A sturdy, great sounding mixer but with limited features.

Spaced-out and simple to use, the mixer has a few key features to set it aside from the crowd, the ﬁrst being nice big wet/dry rotaries on every channel which control the send return levels when using external effects.

The second is the inclusion of a USB audio interface allowing stereo up and down signals when connected to a laptop. This also allows for your laptop to be used as an FX rack by connecting the USB audio RCA inputs and outputs to the FX send and return RCAs.

This is quite a neat little idea although we're not sure how many DJs would utilise this in clubs, but it could be a useful feature for live performance artists.

OK, it's built well, sounds good and is laid out sensibly to boot, but also has its ﬂaws. It's disappointing that the USB is only USB 1.1 and not 2.0 plus, it would be nice if the USB side would accept USB keys rather than having to use the mixer as an audio interface.

Having the USB channel switchable with the mic channel is a tad irritating. It's certainly a decent mixer but when you compare it to the enormous amount of features Pioneer offer for around £900 with the DJM700 it's difﬁcult to really whole-heartedly recommend the Xone:42 despite a few nice features.