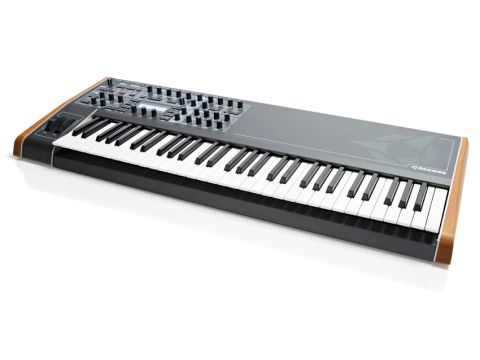 More addictive and deadlier than ever - this is one Virus that you won't mind catching.

This update to Access's popular synth is both hardware- and software-orientated and mostly affects the keyboard, desktop and Polar models of the TI range (though there are benefits for Snow users, too).

A touch confusingly, version 2 of the TI hardware coincides with the release of version 3.0 of Access's Virus Control software editor.

Dealing with the hardware first, this is the first revision to see an update to the physical structure of the TI range itself.

The new Virus range is built from tougher yet lighter materials, so that both the Polar and keyboard versions of the TI range drop in weight. The front-panel layout is unchanged, but the housing update means the new Viruses are better looking and 'cleaner' in appearance.

They stand out a little more and, although the first TI incarnations were built like tanks, these are even tougher, despite their weight-loss.

Perhaps more significant is the physical transformation inside the units. TI2 sees an update to the Virus motherboard, offering a 25% increase in processing power. Rejoice, as this means that polyphony is now increased, which should go some way to pacifying Virus enthusiasts' top update request.

The printed spec suggests that up to 110 voices are now simultaneously playable, though this is of course reduced depending on the number of oscillators and effects running in any given patch.

Alongside the physical benefits of the new TI range, Virus Control OS 3 has arrived too, and there are benefits here for Snow and TI users.

First and foremost, upon download, you'll be faced with installing the software and updating the firmware on your Virus if you're an existing user (though TI2s will, of course, ship with OS3 installed). The latter process took about 15 minutes on the keyboard model we reviewed.

The principal sound-making benefits of the new OS come in the effects section, which has now been split in into FX1 and FX2 pages within Virus Control. The new effects are a wider set of Tape Delays, significant revisions to the Distortion plug-in and an all-new Frequency Shifter.

The Tape Delay revisions provide three new variants - alongside the original tape delay (now re-branded 'classic'), you'll find Tape Free, Tape Clocked and Tape Doppler. These are self-explanatory but none the worse for that.

What's great is that even with high send levels and regenerating feedback, the delays don't over-saturate, so it's possible to take any part and keep it echoing for ages, while tweaking the filter settings to the delay's right, to keep the part moving timbrally.

Also new is the Frequency Shifter, which allows Ring Modulation or Frequency Shifting to be added to your sound. These are welcome and open new worlds of sound design possibility, from heavy industrial clangs, to vibrant, bell-like overtones.

Then there's the Character option, which allows the signature sound of several classic synths to be 'applied' to your Virus patch by shaping the output tone of the sound you're building. Alongside the original mode, Analog Boost, three Vintage settings recall classic synths from yesteryear, while other settings like Lead Enhancer or Stereo Widener speak for themselves.

Each setting features a range of tweakable controls and good things can happen even when you choose an 'inappropriate' setting for the sounds you build. For instance, we got some great results on lead sounds while using the Pad Opener setting.

Apparently, one of the top five Virus user requests has been that the Virus software be configured to allow for sidechain inputs from within a host sequencer. OS 3 delivers this, which means that you can assign an audio input to act as an in-DAW feed to the Virus itself.

So, any stereo source can be processed through the Virus's effects, used as a vocoder input signal, or shaped using the Virus envelopes. Is that the sound of whooping we hear?

We should mention that while Snow users won't benefit from the hardware 'upgrade' to the TI, OS 3 is fully compatible, so the new effects are all yours.

If you're a fan of the Virus concept to the extent that you've already bought one of the TI modules, we can officially announce that Christmas has come late (or very early) for you. Get to the website, download OS 3 and upon installation, you'll discover that your unit has suddenly spawned some very tasty new effects.

For those who have admired the Virus from afar but haven't quite summoned the enthusiasm and/or wedge to commit to a purchase, the arguments for not doing so have become even fewer.

Listen to the Virus TI2 in action: