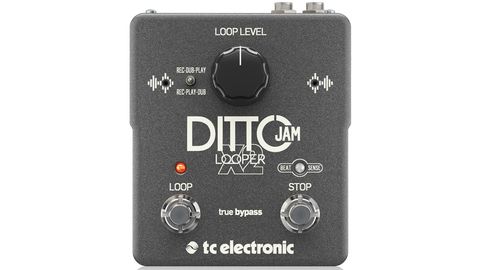 An innovative approach that doesn't quite top the company's other looper offerings.

With the Ditto X2, TC Electronic already has one of the most solid live loopers on the market, and with the Jam, it hopes to bring some extra smarts.

Those changes include a beat sense tempo detector, dynamic loop editor that keeps your loop in sync and a tap-tempo global control for the loops.

When the beat sync works, it’s basically magic. The built-in mic isn’t perfect, but a clip-on mic is included, which you can place closer to your drummer, so it can more clearly distinguish snare hits and a core beat.

It’s an impressive technical achievement, nevertheless there’s an air of gimmick to proceedings; setting up the mic isn’t hard, but it is another thing to think about, and just how much you trust the guitar tech will definitely determine whether you feel like you’re flying more by the seat of your pants or less.

Slowing down a loop using tap tempo is a particularly nice feature and it works seamlessly for practice scenarios, although trusting a guitarist with tempo changes is hardly a foolproof move, as any drummer will certainly attest.

The feature that drags the unit down is the way it tries to pad out to the end of a beat at the tempo it has registered. When using the looper without additional musicians, some loops seem to confuse the Ditto, leaving notes sometimes cut-off, time- stretched or garbled.

Slower chord passages are susceptible to becoming mangled, and if you’re not playing in 4/4, then it certainly feels like the Jam is less predictable as a looper than the older X2.