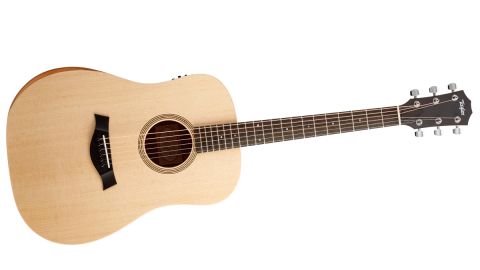 This may just be the dream beginner guitar...and a potential trade-up for some.

The idea that newcomers to the world of acoustic have never had it so good could be a double-edged sword for those who find it hard to settle on their guitar choice.

As the level of instrument quality your money buys continues to increase, so does the list of options out there. The last few years have seen interesting developments from some of the acoustic world’s biggest names: Martin embraced the beginner and budget-conscious side of the market with its Dreadnought Juniors, and Guild’s Westerly series affirmed its commitment to the entry-level buyer.

But before them, Taylor was putting its instruments into new hands thanks to the Baby and GS Mini travel-sized lines. Now the Californians have turned their attention to a full-size series that could put a Taylor in reach of aspiring players sooner. And we’re all ears.

“It’s important to give a beginning player the most comfortable, gratifying experience to make a welcoming first impression,”says Taylor’s master luthier Andy Powers of the genesis behind the Academy Series. “Ironically, in many respects, a player who is just beginning deserves the best-playing guitar,” he adds. “An experienced player can make almost anything work; they’ll simply appreciate a good guitar more. But when you’re starting out, you really need everything going for you.”

It’s an idea that shatters those first guitar memories of cheese-gratingly high action and warped necks that some of us still shudder at. Like a lot of Powers’ concepts, it makes good sense and manifests in the designs he’s worked on here.

The Academy aesthetic is simple. The notably light hue of the solid Sitka spruce here won’t be to some traditionalist tastes, but it gives the guitars a clean, defined look that, as we’ll find out, is reflective of performance. Nevertheless, despite the simple acrylic dot fret markers, it’s not completely utilitarian; the laminated birch and fiber rope braid design rosette is understated but stylish.

Eyebrows will be raised at the sight of the upper body’s armrest. It’s a high-end feature we saw on last issue’s 814ce DLX, but, again, it’s not here for cosmetic purposes. The inclusion underlines not just the Academy ‘form following function’ manifesto, but also Taylor’s approach to sustainability; this simplified version is made from mahogany left over from cutting neck blanks.

While that’s commendable, the choice of mahogany sandwiched between the sapele and spruce looks a little conspicuous for our liking.  In practice, though, it’s an inspired design that can encourage a player to connect in those crucial first moments when interest with a guitar can switch to a must-have. It does this by physically making the guitar easier to bring closer to the player’s body, and is especially beneficial on the larger dreadnought 10e that we have up for review here.

It’s soon apparent that this guitars is not lacking Taylor’s spruce top hallmarks - bright and resonant trebles with assured projection. The low action is extremely welcoming across the ebony ’board, too, and will help open boundaries for aspiring players. Combined with the response of this instrument, it creates an immediately enjoyable playing experience.

The 10e offers lower mid presence alongside the deeper bass response in comparison with the recently-released 12e’s higher range energy. It will come down to personal preference for players between those two models, with shape and tonal balance, but both guitars fare very well as all-rounders at either end of the spectrum for delicate picking, and their projection doesn’t lose its clear definition under heavy strummed playing, either.

So far, so reassuringly Taylor. Plugged in, the ES-B represents the qualities of this guitar well. This guitar immediately sounds like a hot proposition when plugged in. Its definition and rich low-end qualities are present, but we find ourselves dialling back the tone more than we did with the aforementioned 12e model as the high-end sounds punchier here lower on the tone dial. And for some players, the frequency-shaping advantages offered from EQ control via a PA’s mixing desk or pedal unit could come into play more to mellow things out.

Even at the comparatively low price point by the company’s standards, Taylor has serious competition in the market from cheaper models. This is where the ‘Andy Powers difference’ comes  into play: this guitar sounds and feels superior acoustically and plugged in than most models we’ve played in their class, with the exception of Martin. There the preference will be personal, but the ES-B makes a strong case for those who need an electro.

The Academy Series represents a very clear vision, and in many ways, a dream beginner guitar, as well as potential trade-up for some existing players – one that can inspire and go the distance with a guitarist from bedroom to stage.