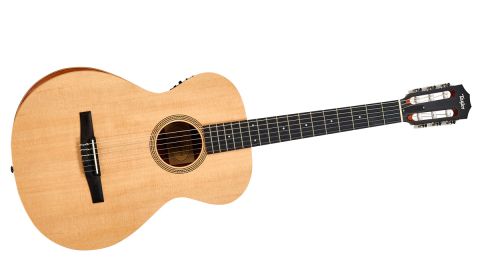 A fine guitar, but it comes at a price.

Taylor Academy’s proposition is proper guitars for - in Taylor terms - not a lot of money: making the “acoustic guitar accessible to more players”.

This nylon string is also, by design, aimed at the younger starter player. It might be entry level in terms of Taylor’s range but, not least in this nylon electro form, it’s hardly low-end with serious competition from the likes of Yamaha and Cordoba, who have ‘posher’ spec’d nylon electros at the same, or lower, price-points.

Taylor’s smallest full-scale shape, the Grand Concert, is the perfect size for a ‘classical’ nylon-string. The 12e-N falls, slightly, into the ‘crossover’ style, not least with its ES-N under- saddle and small-footprint basic preamp, lightly cambered fingerboard and relatively narrow neck. That said, its full depth and non-cutaway style, not to mention its dot inlaid fingerboard, makes it look more like a 00/000 with the ‘wrong’ strings. In typical Taylor style, however, its build is as clean as a whistle.

The satin varnish finish is about as thin as it gets which will no doubt enhance its resonance though it provides little protection; the back of the mahogany neck (with separate head and heel block) and the sapele veneers have an almost open-pore textural feel.

We do get an adjustable truss rod - not part of traditional classicals - and strap buttons on both heel and base, the latter doubling as the output jack which is firmly screwed in place. Along with the classical-style tuners, the tie-block bridge is classy; the slightly compensated Tusq saddle angled back to ensure good down pressure over the under-saddle transducer. Fretting too is superbly consistent.

The Taylor is set a shade under 3mm on the trebles and bang on 3mm on the bass side. The Taylor’s voice is classical with an open midrange; hit hard it has an almost flamenco-like character yet played in a more relaxed Latin-style its voicing allows clear representation of the often complex jazzier chords of that genre.

The guitar’s tuners - machineheads and the onboard digital tuner - work efficiently. The latter is extremely handy on a nylon string, as they take more time to settle to consistent pitch compared to steel.

Plugged in, we really can’t fault the Taylor; it is crisp, balanced and with a low end that won’t run away with you. Onstage you might rely on a floor tuner or outboard preamps, which suits the simplistic Taylor. The Taylor’s soundhole is circular and will take a soundhole bung.

There are very few negatives. The Taylor impesses in terms of neck shape, size, playability and comes with a crisp, defined voicing. It comes at a price though, bringing in some serious competition.

As ever, if you’re new to the parallel universe of the nylon string: play as many as you can and find your fit.