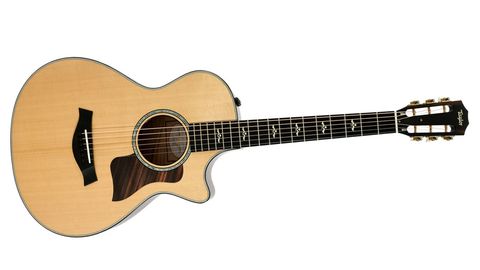 One of the best guitars we’ve laid our hands on.

Taylor introduced the revoiced 600 series a couple of years ago with the intention of making guitarists rediscover a wood that has legendary status in the violin making world: maple.

For some, rightly or wrongly, maple has a reputation of being toppy and brittle; a sound that can cut through in the mix, but lacks the warmth and depth of character of some other tonewoods. It’s been a success too, according to Taylor. Players’ preconceptions have altered as they’ve got used to Taylor’s master guitar builder Andy Powers’ changes - including the advanced performance bracing with relief rout that doesn’t extend fully across the back of the guitar, but allows the maple extra space to vibrate and resonate.

The 600 series pairs the maple with a spruce top that has gone through Taylor’s torrefaction process, which accelerates the wood’s aging process through heat. The heat releases water and sap from the wood and promotes greater stability. Aesthetically it adds an extra hint of quality. Tonally... well, we’ll get to that.

The guitar have here is the smallest and largest that Taylor offers: the 612ce 12-fret in the Grand Concert body shape.

We couldn’t find a single fault with this guitar’s build quality. The torrefied spruce top is the first thing you see when removing the guitar from the supplied hardcase and it’s a thing of beauty. But spin it round and you can enjoy the ‘brown sugar’ maple that adorns the back and sides. We’ve always loved the look of natural maple, but it seems that we weren’t in the majority, and Taylor made the conscious decision to darken the wood in order to appeal to more players.

Bob Taylor told us: “Notice that we made it in a way that would please a player, rather than asking a player to change their likes and desires. It sounds fantastic, because we changed what most players didn’t like about the maple sound. And it looks great because we make them brown. Don’t laugh at me! People prefer brown guitars over blonde guitars. It’s a primary motivation that we understand, and so we adapted. Sound and appearance, sound and appearance - it all comes down to sound and appearance. And why not? Those are two great senses, and the 600 Series pleases them both, so people embrace it.”

The blind tests carried out by the Leonardo Guitar Research Project showed that a guitar’s appearance can affect how we perceive its sound, so it would make sense that by making maple look less like maple, we would be less likely to hear its perceived characteristics. For now, let’s just say that whatever your opinion on natural maple, the ‘brown sugar’ finish looks stunning.

As we’re talking about woods, let’s also mention the sustainability aspect of the 600 series. The maple comes from Taylor’s partnership with Pacific Rim Tonewoods, while the ebony that features on the bridge, fingerboard and - most strikingly - on the pickguard, is the fruit of Taylor’s work in Cameroon at the Crelicam factory.

The variegated effect that appears on the pickguards is simply stunning. The fingerboard is more standard ebony fare, with a streak of colour along the top-side that contrasted against the fret markers and, sadly, could possibly have been enough to see the wood cast aside by a less ecologically-driven timber grader.

It all combines to give real character, with each part of the guitar’s construction revealing a story: whether that’s how the guitar can impress you with its sustainable credentials, or how even the protein glues used to hold things together have been chosen in the pursuit of tone and lifting maple’s status as a tonewood.

That Grand Concert body shape gives the guitar somewhat dinky proportions, with a 24-7/8” scale length and a body depth of 4-3/8”. The cutaway on the 612ce also means that you have unfettered access to the dusty end of the fretboard and straightaway you get the feeling that this guitar is a fingerstylist’s dream.

The 612ce is an unbelievably comfortable guitar to play. It just fits into your body and the fretting hand feels remarkably relaxed thanks to that slightly shorter scale. Staying up in first position provides a surprisingly loud and complex tone. The projection from this little guitar is quite staggering. We found that, perhaps because we were unused to the smaller scale, a shift in our right hand closer to the soundhole brought rich tonal rewards. The slight harshness in the initial attack was quelled and a well-rounded, sonorous quality sprung forth. The individual note separation is exceptional, and the combination of the maple and spruce gives a decent level of sustain.

The tone is still that of a maple guitar, but a more refined one than we’re used to. Likewise with the torrefied spruce: it’s immediately familiar, but with enough difference to cause a cocked ear. The revoiced maple is still bright, but it certainly has more presence in the low-end than we expected. It’s not shrill, but smooth and even across the strings.

For a guitar so set up to be seen as a vehicle for fingerstyle, its response to strumming out chords and standard singer-songwriter fare was pleasing, and it put in a good shift when subjected to some country-style flat-picking, too. But, it is fingerstyle playing that this guitar lives and breathes. There’s a precision to the tone that, as you would expect with a maple and spruce instrument, cuts through the mix nicely - and yes it would work well on stage, though that is not intended as the back-handed compliment that some level at maple- bodied guitars.

But because the tone belies your perceptions of the wood, it’s the sort of instrument that makes you want to run through your entire repertoire just to hear how each song sounds in this particular configuration.

Whatever the press talk that accompanies the torrefaction process, the truth is that the tone from the top is more open than you would expect for a guitar straight out of the box. It’s the sound of a well-used and well-loved guitar. As someone who has spent more time in our life than we’d care to admit ‘knocking-in’ cricket bats to get the willow ready for use, anything that can bring out wood’s best qualities straight away sounds like a great idea to us.

By any token these models from the 600 series are stunning guitars. They have a laudable ecological footprint, they look superb and they have rich, unexpected tonal qualities given what we expect from the woods use.