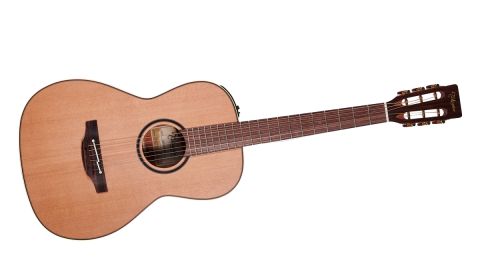 A class instrument - hooray for the little guy!

Available only through a select range of Takamine dealers, the company’s Collectors’ Series represents a special-edition run of hand-crafted instruments that have been fashioned by a small and select team of skilled luthiers.

We count seven models in the current series, which ranges from the two you see here through to the nylon-string H8SS (£1,549), the dreadnought-sized CP5DCO-AD (£2,199), right up to the most opulent member of the magnificent seven, the abalone-encrusted Gifu-Cho NEX (£2,599). As you can see from the prices shown here, Takamine hasn’t aimed this particular series at hedge fund managers and their like, but is quietly offering up some premium limited-edition models that will appeal to the everyman budget. Good on ’em, we say.

The diminutive CP400 New Yorker falls between a larger parlour or smaller folk size.  The New Yorker is already an established model within Takamine’s acoustic range, but the Collectors’ Series version boasts a few whistles and bells that are not to be found together among the rank and file. To begin with, the choice of bodywoods is intriguing. Cedar - the New Yorker’s top - is established as a fine top wood, used in classical guitars as well as steel-strung acoustics and is well known for its warmth and vibrancy, tonally speaking. It’s also quicker to give of its best than its sparring partner, spruce, as spruce can take years to open up and mellow down, whereas cedar tends to give 90 per cent from the word go. Koa, on the other hand, is perhaps more unusual. Native to Hawaii - in fact, it’s the second most common tree in that region - its appearance varies quite considerably, but the common denominator is the golden brown hue we see here. It can be either figured or plain in terms of grain, and luthiers applaud it for its mahogany-like midrange and maple-like top-end. Koa will also open up over the years to present a rich, sweet resonance and tends to be favoured by fingerstylists for its combination of snappy mids and honeyed trebles. The grain here is of the plainer variety, but close inspection reveals some figuring, especially on the instrument’s sides.

The cedar top is straight-grained and businesslike, and it’s also worth noting that, because of the 12th-fret body join, the bridge subsequently sits at the wider part of the guitar’s top. This is known to add volume and projection to an instrument and will no doubt deliver more of both here, despite the New Yorker’s diminutive proportions. As a footnote, we’ll add that  the bridge is top-loading and so there is no need for bridge pins.

The CP400’s neck is mahogany - and quite chunky, too. When we ran our eyes down the spec list to begin with, we were concerned that the 42.5mm nut would make the neck feel a little toy-like or take on some of the characteristics of a three-quarter size, short-scale guitar. But the chunk remedies any concerns we may have had. The neck feels really rather nice in the hand.

The acoustic tone here is slight, as befits the body size, but still packs enough whack to get its point across. We would prefer it if the strings were perhaps a gauge or two heavier because these feel like 10s or, at a pinch, 11s. A set of 12s would set those timbers a-singin’ and offer a little more clout to the sound. Also, the narrower nut means that fingerstylists may struggle a little down in that region. Smaller hands will love it, though.

Possibly the best word to describe the CP400’s unamplified voice is ‘demure’. It’s possibly not going to be declared the champ in a slugging match with a D-28, that’s for sure. Its quiet, sweet voice would suit gentle strumming and - for those with smaller hands - some deft fingerstyle. It may be slightly bigger in stature than a parlour, but that might be the best mindset to adopt here and where its charms would be best appreciated.

The guitar has Takamine’s CoolTube preamp/pickup system installed and if you haven’t come across these before, they have a valve in them, plus a very comprehensive EQ system that allows the user a real opportunity to sculpt the amplified voice to his or her own taste. Powering up the New Yorker first and we’re in for a surprise because almost all of that demure quality we found acoustically has been supercharged. Even with the EQ controls flat on the guitar’s preamp and our standard-issue AER Compact 60, the guitar has revealed an alter ego that has excellent note separation and a toneful presence that contradicts its somewhat svelte size. Boost the bass a couple of decibels and the tone is transformed from the well behaved to the positively mischievous.

The New Yorker is a little Jekyll and Hyde, with its polite, parlour-like acoustic characteristics turning readily into wanton fire. It’s a bit like Mick Jagger - slight, but with so much amazing stage presence that you can’t take your eyes off him.

For the money Takamine is asking for this instrument, and considering that it forms part of a limited edition - and is handmade - you would be well advised to seek it out and test its prowess for yourself.