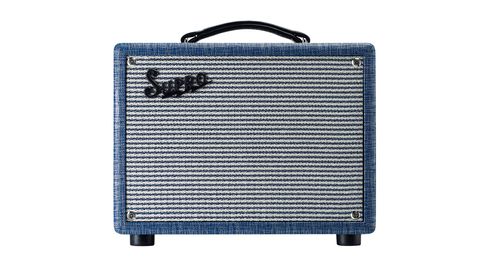 Surely, one of the coolest small amps out there at the moment.

There are few more iconic rock guitar images than a wall of 4 x 12s topped by 100 watt heads, and we’d all like to play on a stage with that kind of backline at least once, but ironically the biggest sounds on record often come from the smallest of amplifiers.

Small single-ended combos are behind some of the biggest riffs in rock history, which is perhaps why we continue to love them so much. Under the guidance of New York-based effects pedal supremos Absara Audio, Supro’s successful and long-overdue return as a leading US-amp builder has largely been based on recreations of combos that forged success back in the 1950s and 60s.

Now, their catalogue has just been expanded with this new product that may just prove to be the most desirable yet, the 1606 Super.

Original Supros were built up on tagboards, making even the simplest of circuits look like a bewildering rat’s nest of cloth-covered wire, resistors and capacitors. The modern versions use high-quality printed circuit boards with a clean, economical layout that helps to maximise signal fidelity. Metal film resistors are used to keep hiss levels down, while wiring is neatly twisted to reduce hum. It’s reassuring to know that just like their bigger brothers, this small Supro is built to last.

The amp is a simple, single-channel design inspired by original circuits dating back to the 1960s and earlier. Based on the original design, the non-reverb Super is as simple as it gets, with just one control for volume and a pair of high and low gain input jacks.

On the underside of the chassis there are three line outs - two fixed level ones for dry and reverb only, with a variable level mix output. This arrangement adds some useful if slightly quirky flexibility, allowing for separate processing of dry and reverb signals.

With so many sockets on the rear (there’s also a power amp input as well as two speaker jacks), it’s good that Supro has thoughtfully fitted a useful information plate to remind us what each one does. Fitting the mains kettle lead to the chassis IEC connector isn’t so easy in the confined rear access; we’d recommend using a ‘P’ clip to secure the cable once installed, to prevent accidental removal.

The amp powers up smoothly and quietly, with minimal hum from the single-ended 6V6 output stage. We tried it out with a variety of single coil and humbucking guitars, including an original ’72 Les Paul Custom and an old Strat loaded with Duncan Alnico Pro 2s.

Supros have a distinctive midrange, which the new SS8 speaker captures really well. It’s one of the strengths of smaller loudspeakers that the frequency range is compressed into an ideal bandwidth for the electric guitar, with little or no EQ manipulation to get a good sound onto a track. This is one of the reasons why tracks recorded with small amps like this sound so huge; you’re not removing any signal to make them fit into a mix, it’s all exactly where it needs to be.

The Super’s single volume control can produce a satisfying range of colours, from nearly clean to a full-on gnarly overdrive that sounds great for USA-influenced classic rock and blues. Supro actually used an original 1606 Super from Aerosmith guitarist Joe Perry’s collection to voice their reproduction and the resulting tones are very authentic.

As is often the case, the lower gain input is a little darker and best suited to bright single coils or active pickups, while the high gain input is fine for most passive guitars.

This new mini Supro is compact and portable with power and volume to spare, making them ideal for recording and practice. There’s plenty of character and attitude too - the aggressive, edgy midrange tones of the SS8 loudspeaker overflow with vintage American mojo, reinforced by classy looks and excellent build quality.

The simplicity of the Super means you need to work with the amp to make your sound happen, something that players used to getting everything from a pedal may find refreshingly different. The USA origin means this isn’t the cheapest small amp out there but overall, we think you’re getting good value as it has to be one of the coolest small amps out there at the moment.