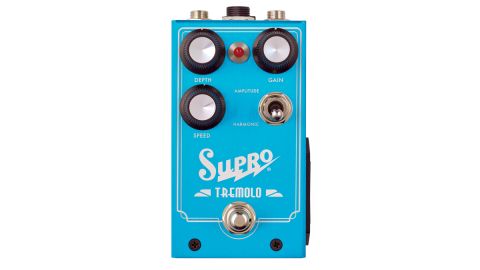 Recently added to the new range of Supro pedals, the Supro Tremolo is designed to recreate two different types of tremolo effect found in American amplifiers of the 1960s.

By selecting with a large toggle switch, you can have Amplitude mode, which offers the conventional tremolo sounds typically generated by bias-modulating an amp’s power valves, or Harmonic mode, which apes the more phase-y tremolo associated mainly with Fender ‘brownface’ amps.

Standard Depth and Speed knobs (with the extra option of adjusting speed via an expression pedal) dial in the trem effects, which, in both cases, sound excellent: the Amplitude trem has a classic pulse and throb, while Harmonic has that extra hint of pitch change.

The coolest thing about the pedal, though, is the Gain knob, which doesn’t turn up the output volume as such, but sets the amount of preamp gain in the pedal offering various degrees of overdriven texture to the trem.