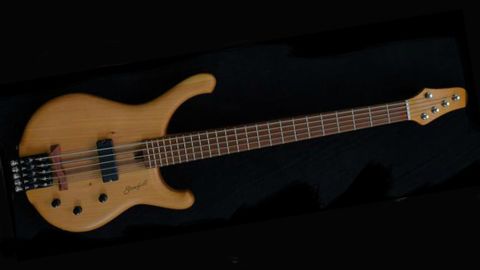 A fine instrument and worthy of consideration.

Like many bassists, we were struck by Tomm Stanley and his Stonefield M-Series instruments at last year’s London Bass Guitar Show - and with good reason.

Here was an independent luthier, starting out with a product range that didn’t really conform to the traditional bass designs we all recognise. The high price point of the M-Series was an initial issue, so Stanley went back to the drawing board and came up with the new C-Series of basses which maintains a premium product at a lower price.

The series comprises the C1-5S and the C1-4C. How do these new creations match up? Let’s start by taking a look at the C1-5S.

Stonefield’s striking wooden visuals have been maintained, with this bass sprayed with a satin lacquer to allow the timber grain and figuring to shine through. The curvaceous body design with the deep cutaway gives the player a stable platform to work against: the comfort aspect is excellent, as is the balance. The bass feels substantial without being excessively weighty, and although there is a bulky feel, it still feels playable.

It has a full, deep D-shaped neck profile. The string spacing is set at 16mm and the standard of neck and fret finishing is excellent, as you would expect of a handmade instrument, and the clean natural visuals mean the dark massa fingerboard remains clean with no position markers (white dots have been used on the side of the neck).

Stanley’s patented stainless steel and anodised aluminium tuning system has been retained, as has the through-body stringing, while a single-piece floating bridge has now been utilised. With the string retainers positioned on the headstock, the balance is fabulous, helped by the upper strap button’s location behind the top horn on both instruments. Even with the added weight of the five-string, the instrument balances very well.

We were struck by the level of tonal flexibility provided by the passive electronics of the M-Series, but have no fear, the C-Series instrument certainly isn’t lacking in that department.

This bass has an extremely resonant tonal character and the sustain is pleasing. Holding the bass, you can feel every note you play. It’s also good to hear equal string volume across all the strings.

It feels, and sounds, as if each string carries a little weight and power and has a solidity to its signature core tone that stands out, which is no bad thing. Passive five-strings can sometimes be a little underwhelming in the low register, so it’s pleasing that this particular bass has plenty of presence at that end.

Judging from this example, Stonefield now has a product to compete with other manufacturers at this price-point. With this range now available at Midlands dealer Bass Direct, we suggest you track one down to see what the fuss is about.