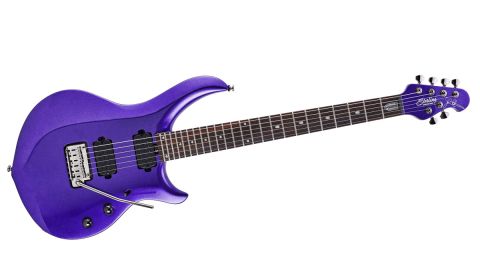 This Sterling effort is one Royal baby we can all get excited about.

That, and the fact that he’s been a Music Man endorsee for a good 20 years or so. In fact, so fertile has his relationship with the California-based brand been that he’s regularly spotted in the company of more new models than Rod Stewart.

The latest release is an addition to his Indonesian-made Majesty guitar. This one, the ‘X’, brings a couple of new finishes to the existing Majesty range: a toothsome Pearl White and the princely Purple Metallic you see splashed all over these pages. A good excuse, in other words, to catch up with a guitar that promises plenty. To bring you up to speed, the Majesty range was developed to meet Petrucci’s need for a set-neck guitar. His other signature models have your classic five-bolt MM neck attachment, natch. So, as expected, this new Majesty X has a three-piece mahogany neck, seamlessly sculpted to a beautifully contoured mahogany body.

Anyone who’s had their wicked way with a Gibson SG will agree that mahogany is a fantastic wood. It can also be very light. Our Majesty only weighs 2.9kgs. That’s a mere six and a half pounds in old money. Part of that poundage is down to the black chrome hardware. You get a floating six-saddle bridge with a push-in arm and a set of locking tuners in the familiar Music Man ‘4+2’ formation.

The twin Sterling humbuckers are direct-mounted to the body and both run through a master volume, master tone and a three-way selector switch, activated via the tiniest knob we’ve ever seen on an electric guitar. The volume control has a push/push function that engages a 12dB boost powered by a nine-volt PP3 battery.

The USP of the Majesty is its ergonomic blueprint. Everything is designed to make it as easy to get around the 648mm (25.5-inch) scale neck as possible. To that end, we expected the neck to be a real skinny Minnie. In fact, there’s a comfortable level of depth in that C profile that should extend its appeal beyond the hirsute speed freaks. The rosewood fretboard comes spec’d with 24 medium jumbo frets and a 400mm (16-inch) radius. Interestingly, Petrucci’s US signature guitars feature a 432mm (17-inch) fretboard radius. That spec sheet discrepancy aside, negotiating the Majesty X ’board is a breeze. Upper-fret access is superb.

We’ll award yet another gold star for the setup. Unlike many shred machines we’ve tried, the Majesty has a bit of fight in its belly. It comes fitted with Ernie Ball Regular Slinky (0.010 to 0.046), which makes string bending a bit more sporting.

We are disappointed that the Majesty doesn’t come with JP’s signature DiMarzio Rainmaker and Dreamcatcher humbuckers as fitted to his latest US Majesty guitar. It feels like we’re missing out on a key piece in the man’s tonal jigsaw puzzle. As it is, the twangy Fender-style scale length and vibrant all-mahogany body and neck make a great springboard for the Sterling humbuckers. The bridge pickup unloads bags of sparkle through our clean channel.

Flicking the tiny pickup selector knob through the remaining two positions adds increasing amounts of neck pickup beefiness without sacrificing definition. That clarity remains intact when you feed the pickups some gain. Note separation, even on the really filthy settings, is impressive. You’d expect that from an instrument spec’d by a note technician like Petrucci, although this guitar can cut the mustard no matter what musical genre you’re into.

The real jewel in the Majesty’s crown is that 12dB boost. This thing gives your amp a real wallop when you set it free. It’s perfect for punching your lead work out of a mix. Every guitar should have one.

Black clouds? As competent as they are, we do feel a bit shortchanged by the Sterling’s pickups. While we don’t expect all the bells and whistles of the £3k-plus US models, a pair of Petrucci’s signature DiMarzio humbuckers doesn’t seem like such a big ask to us. We’re paying over a grand for this thing, after all.

The silver linings? Pretty much everything else. Build quality is good, that 12dB boost function is very useful. More than that, though, the touchy feely ergonomic stuff Petrucci demands from his American-built Majesty models is present and correct here. You get the low action, access-all-areas frets, not to mention the entire package’s featherweight demeanour hanging from a strap. Yes, this Sterling effort is one Royal baby we can all get excited about.