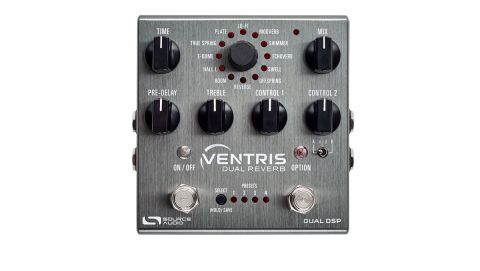 A pedal that offers a pedalboard-friendly footprint and easy hands-on functionality.

Those requiring the ultimate do-it-all reverb pedal have been catered for lately by the units from Strymon, Empress and others.

But one pedal that has been highly anticipated since its unveiling at the 2017 NAMM show is the Source Audio Ventris, billed as a Dual Reverb with the promise of moving the whole high-end reverb game along.

Now, finally, we have a pedal with a relatively modest footprint that contains two totally independent reverbs that can be used singly or combined in parallel, in series or Left/Right - with various modes of mono and stereo operation being available.

There are 12 distinct reverb engines available from the front panel but, like previous Source Audio pedals, more will be available via the Neuro software, an editor program, available in iOS and desktop versions that we don’t have at the time of review but which should be on-stream by the time you read this.

Other features include full MIDI functionality offering access to 128 presets, expression pedal control of assigned parameters, direct hands-on access to a limited number of onboard presets and a second ‘Option’ footswitch that has both Tap and Hold actions for different functions for each reverb type, like freezing/looping the reverb tail, but can be assigned to a range of tasks, including A to B and A+B processor toggling, via Neuro.

Source Audio’s intention was to keep the Ventris user-interface simple and they’ve managed that extremely well with just a 12-way rotary switch, six knobs and a three-way toggle switch providing instant access to all of the essential parameters. There will be much deeper tweaking available via the Neuro editor but at no point did we feel that we needed any more than the front panel provided to dial in a usable sound.

Four knobs offer the parameters that any reverb-user would consider paramount - Wet/Dry Mix, Decay Time, Pre-Delay and Tone (a Treble control). Two other knobs - Control 1 and Control 2 - deliver a different function for each reverb type, Modulation Depth and Rate being typical examples. Reverb A, Reverb B or both together are accessed by the toggle switch, and if you have developed a particular killer combination (or a single favourite ’verb) it’s an easy matter to save it as one of the four presets accessed from a front panel button or either footswitch. Incidentally, this can be extended to eight (with preset numbers 5-8 indicated by an unlit rather than lit LED).

The outstanding impression of hearing the Ventris in action for the first time is the quality of its reverbs. We get emulations of various spaces, plate and spring analogue reverbs, more esoteric options like the popular ‘shimmer’ reverb, and practical working solutions like combined reverb and delay.

Particular highlights include the Spring which may just be the most accurate digital repro of the real thing that we’ve heard in a pedal. Surf guitarists looking for that specific set of reactive characteristics that typify a good spring reverb should be impressed.

E-Dome is an ethereal effect that lets your sound float in a mist of huge ambience - similar in scope to Strymon’s Cloud setting, while Modverb combines tremolo and spring reverb for some of the flavour of a vintage Fender amp.

Any pedal providing two high-powered reverb pedals in a single enclosure has to be something special, especially where the individual signal processors make it possible to change from one preset to another while letting the reverb trail of the original linger.

The Boss RV-500 appearing first with its A/B Simul mode supporting two reverbs may have stolen some of the Ventris’ thunder but the two are quite different, both with features that will attract their own set of users.

What we like about the Ventris is its pedalboard-friendly footprint and easy hands-on functionality. If you want simplicity it’s there straight out of the box but you can get as complex as you like with the Neuro editing app.

But the main plus point is the provision of a set of reverbs that seem expressly tailored to guitar players’ needs; a thoughtful combination of the vintage (Spring, Modverb) and modern (Shimmer, E-Dome, Offspring) that just make you want to plug-in and play. Taking those and being able to use them together makes this a formidable ambience workhorse that many players are going to want in their signal chain.