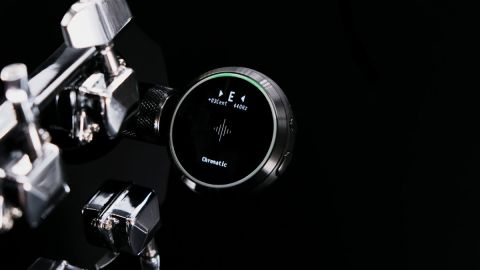 A big step up from the Pulse, advancing the company’s mission to make attractive digital timepieces for performing musicians.

In a world full of smartwatches that focus on fitness and phone calls, it’s a bold move to create a product that caters exclusively to the needs of musicians.

Two years back, Soundbrenner released their Pulse smartwatch, which focused on providing a haptic metronome for live performers who need to stay locked in groove.

The new Soundbrenner Core expands on that premise with new features that make it even more effective as a wrist-mounted Swiss Army knife for musicians. These added features come at a premium (more than twice the original’s price) but this is partly offset by its excellent build quality and accessories.

In addition to the Core watch module and charging cable, there are two straps and a strap for artists who want to attach the haptic metronome to their arm, leg, or chest (a bonus for kit-based drummers). There’s also a pair of rubber attenuating earplugs in a metal case and a small magnetic tuner disc that attaches to your instrument of choice with included temporary-but-robust adhesive.

As with the Pulse, the Core includes a haptic metronome that can be heavily customised – either on the watch or via the app – to include downbeats and accents. These emphasised beats can even be colour-coded to flash the watch’s LED ring for visual reference.

The app also includes the ability to sync the metronome via Ableton Link. The haptics feel more refined; the Pulse could be audibly buzzy, the Core feels punchier and quieter overall.

The centrepiece of the Core is its ability to serve as a tuner for your instruments. If you’re using it on a guitar, it will magnetically attach to the tuning pegs and display tuning as note-and-cents, glowing green when you hit the target. This is also where the metal disc comes in. Attached to a violin, you can use it for pitch detection as you tune the strings.

Since this tuner works through vibrations and not via a microphone, I attached the disc to one of my studio monitors to see if I could use it for tuning my modular gear and it worked quite well, with volumes set properly. Soundbrenner even plan to add Hertz-based pitch-detection in a future update, ideal for sound designers.

Like the Apple Watch Series 5, the Core also includes a decibel meter that displays the ambient volume of your immediate area. It can be set to alert you when you exceed safe volumes, which is a boon for artists who care about their hearing. If the stage or club gets too loud, just whip out the included attenuating earplugs and you can (ideally) prevent any damage.

In addition to the musical tools,the Core includes the usual timer/stopwatch functions of a digital timepiece, as well as basic notifications for messages and phone calls. It’s not what you’d get from an Apple Watch or Samsung Gear, but in light of the other specialised features, it’s a fine companion for musicians who aren’t particularly media (or fitness) obsessed.

All in all, Soundbrenner have very nicely fulfilled their stated goal of creating a stylish digital device for those live artists who require easy access to onstage essentials like metronomes and tuners.

MusicRadar verdict: A big step up from the Pulse, advancing the company’s mission to make attractive digital timepieces for performing musicians.

"With the Core, Soundbrenner has attempted to expand beyond the pro musician's playground and become attractive to a much wider audience. It's succeeded, to a degree... If you are a musician and can get used to the Core way of doing things, it's probably the best wearable you can get."
Mashable

"No matter how loud we played, we were able to feel the beat no matter what. More importantly, we were able to focus on playing to the best of our abilities instead of trying to listen out for the beat. The only downside is that the magnetic tuner could be easily lost. Make sure you keep it safe in the box!"
The Pianist Magazine