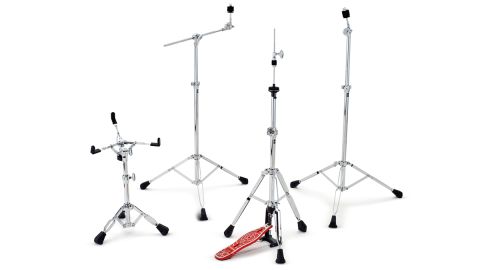 Shaw has clearly researched the hardware market thoroughly and the results can only add to the company’s profile.

Shaw Percussion is probably best know for its range of sticks and drumming accessories but it also has a long and rich history of drum making.

Established in 1866, Shaw celebrated its 150th anniversary in 2016 and continues manufacturing custom drums from its Kidderminster HQ. The M-Class hardware on review is one of two stand ranges recently added to its product lines.

Slotting in below Shaw’s K-Class series, the M-Class stands share features and design cues with the higher spec Ks. Both ranges evolved from designs penned by the now-defunct but highly-regarded hardware manufacturer Big Dog.

Shaw distributor The Music Shipping Company acquired the tooling rights for the original Big Dog designs when the company closed; these were tweaked and modified before being rebranded and marketed as Shaw stands.

While the K-Class series includes bass drum pedals, the M-Class range currently consists of stands only. Shaw feels that undercutting the K Class pedals’ price point by the required amount would involve too great a compromise on quality.

“We give a two-year manufacturer warranty on all Shaw hardware,” TMSC’s Craig Fenney explains, “so a ‘cheap’ pedal does not fit into our thinking.” Interestingly, while Shaw offers a selection of drum thrones and stools, none of them are aligned with either the K or M-Class series, but are marketed as standalone products.

Shaw is planning to add new stands to both hardware ranges whilst also looking to develop all-new hardware lines in the longer term. For the time being though, the M-Class consists of the four stands on review: an upright cymbal stand, boom-arm cymbal stand, snare stand and hi-hat stand.

As with the K-Class, M-Class stands are manufactured in Taiwan; in these times of near-ubiquitous Chinese mass-production this is a refreshing bucking of the trend. The stands certainly look the business, gleaming with a superb chrome-plated finish.

Unboxing them, there’s also no mistaking a feeling of reassuring heftiness. The lightest two stands of the quartet - the snare and upright cymbal stand - are both 2.75kg, while the boom stand and the hi-hat stand weigh in at 3.45kg and 3.65kg respectively. Much of this bulk can be attributed to the generous tubing and sturdy, double-based tripods, which spread wide enough to cope with the heaviest of loads.

Mirroring the solid metalwork above are Shaw’s branded and rather impressive chunky rubber feet. Their ribbed finish means that once they have been planted in the correct spot, the stands are unlikely to wander in any direction. In the case of the hi-hat stand, extra traction is available in the form of a pair of retractable spikes.

Shaw has clearly designed the stands to be as versatile as possible; the snare and hi-hat stands have lowest setting points of 15" (385mm) and 25" (640mm) apiece, making an 8" deep snare still playable while open-handed hi-hat players in the style of Simon Phillips would be able to nestle their hats below a crescent of rack toms.

Both the cymbal stands also have a wide spread of height adjustment, starting from 33" and topping out at 41⁄2ft (1,375mm) and 6ft (1,830mm) respectively. The boom arm slides down inside the tubing for packing, making the boom stand only marginally taller than the upright when folded up.

In the place of conventional cymbal felts Shaw has instead fitted Swiss-made Cympads, cellular foam discs, which claim to be superior in just about every way (isolation, suspension and, most importantly, sound). Appropriately, scaled down Cympads are also found on the hi-hat clutch.

The claims would appear to have substance, as my cymbals sound, well, more cymbal-like, particularly in the quality and depth of the decay. Cympads feel good to handle as well - you get the impression they won’t fray or deform over time in the way that felts inevitably do.

The tilters are all toothed - while the hi-hat tripod swivels to make room for a double pedal. Shaw’s Ferrari-red cast footboard - designed for the K-Series - is found on the hi-hat stand. It features a professional grade single chain and an angled heelplate that is almost a continuation of the main footboard.

Unlike the K-Series equivalent there is no spring adjustment to be found on the M-Series stand. However, the action is beautifully smooth and silent and right down the middle in terms of tension - only players who favour extremes of spring feel will have anything to complain about here.

The snare stand’s cradle will splay wide enough to fit a 15" diameter drum and then close to minimum of 12", making it suitable for main or auxiliary snares and also toms.

Heavy-duty Shaw wingnuts are found at every locking point on the stands. They tighten securely and, due to their curved design, are equally compliant when being freed off; another great detail that adds to the feeling of quality.