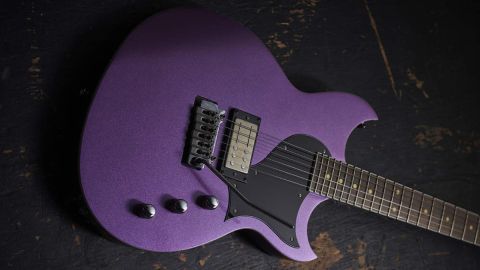 If ever there was a guitar that could challenge your preconceptions and prejudices against the practicality of running a single pickup, it’s this.

“Reeves Gabrels approached us at a NAMM show several years before he was in The Cure,” remembers Reverend head honcho, Joe Naylor, on the origins of this new Dirtbike model. “He loved our guitars. We are fans of his work. It was a no-brainer.”

Aside from his aforementioned work with The Cure, Reeves Gabrels worked with David Bowie from 1987 to 1999 and was a member of The Thin White Duke’s Tin Machine project. You don’t shut the door on an artist of that calibre but, according to Naylor, it doesn’t matter how big you are, if you want a Reverend signature, rules are rules: “It has to look like a Reverend. It has to be saleable. Oh, and no black or gold hardware!”

The Dirtbike sees the solid Korina body, 305mm (12-inch) radius Blackwood Tek ’board and Wilkinson vibrato of the Signature, spliced with the Gibson scale and set neck of the Spacehawk. Other features, all classic Reverend, include master volume, master tone and Bass Contour Control, 22 jumbo frets, locking tuners, a medium-oval neck profile and the distinctive headstock shape, somewhere between those of a Fender Strat and a '60s Epiphone ‘bat wing’ Crestwood.

Of course, the Dirtbike’s USP is its single pickup format. In this case you get a Railhammer Reeves Gabrels Signature humbucker, a custom-wound version of Reverend’s popular Alnico Grande pickup. Let’s see how it fares...

Single-pickup guitars are not everyone’s cup of tea. To the uninitiated, a Gibson Les Paul Junior might look the absolute business, but who wants to get stuck with a one-trick pony? The truth is, a single pup machine can bring out your creative side. You suddenly find out how useful the volume and tone controls can be, and you get sounds you would never have discovered on a two-or three-pickup guitar.

Before we even plug in, the Dirtbike sounds bright and resonant at idle. Run through a clean channel, the Railhammer humbucker adds some sparkle to the body’s natural voice. Think of this Gabrels model as a PAF with some extra punch. It’s overwound yes, but not enough to compromise your clean tones.

Twisting the throttle with some overdrive brings out the pickup’s edge. Again, you feel that vintage warmth on classic rock riffs but there’s a hi-fi like clarity emanating from those fat polepieces and rails which sets this thing apart from the crowd. As Joe Naylor says: “Railhammer is all about tight lows on the wound strings, and fat highs on the plain strings.”

The Dirtbike also excels at in-your-face metal stuff but there’s more to this guitar than three decent sounds. Thanks to the onboard Bass Contour Control you can suck some of the bottom end out of the Railhammer. Halfway along its sweep you get a fat single-coil vibe, pretty close to a P-90. Back it all the way off and you’re in Strat territory with additional airiness provided by the Wilkinson vibrato.

We should also mention that the Dirtbike is a dream to play. A 305mm (12-inch) radius and fat frets always make us happy. Tuning stability is peachy, too. That said, the 629mm (24.75-inch) scale length makes the factory spec 0.010-0.046 strings feel a bit floppy to us. We reckon something with a bit more girth is in order.

If ever there was a guitar that could challenge your preconceptions and prejudices against the practicality of running a single pickup, it’s this. The Dirtbike not only lives up to the Reverend design rules and the brand’s strict build quality criteria, it pulls as much tonal variation from that lonesome Railhammer as is humanly possible. Playability is excellent too, even if we’d recommend bumping up the string gauge a notch.

You don’t get a case or gigbag - a bit of a poor show - but now you’re hooked you can choose from a palette of finishes from the Metallic Violet of our review model to Reeves Blue, Violin Brown and Metallic Emerald. All you need to do now is get on your bike.