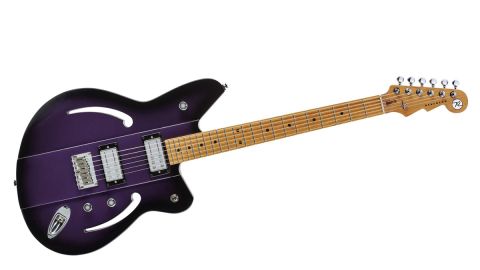 Okay, there is some familiarity in the profile but we can’t fault the build quality, playability, tuning stability tone and value for money. We’re converts for sure.

In the beginning, 1997 to be more precise, Reverend Guitars was founded by luthier and amplifier technician, Joe Naylor.

Since then, the marque has picked up more endorsements than your average boy racer with the likes of former Bowie sideman Reeves Gabrels, gifted Dwight Yoakam and Buck Owens collaborator Pete Anderson, and the late great Ron Asheton of The Stooges, securing signature models.

Quizzed on his spec sheet staple, Reverend’s Joe Naylor explains why he’s forsaken all other timbers in favour of korina: “It’s very consistent weight-wise, very resonant, and has a very even tonal quality that works well with almost any pickup.”

Rattling through the rest of the specs you’ll find that the Airsonic RA features a maple six-screw bolt-on neck with a snappy Fender-style 648mm (25.5 inch) scale length, 305mm (12 inch) radius fingerboard, 22 medium jumbo frets and a set of locking tuners. You’ll also be glad to hear that none of God’s creatures, either great or small, were harmed in the making of the Boneite top nut. This beautifully cut item is designed to be much more slippery than actual skeletal remains, and no bones about it.

Like Noel Gallagher of Oasis, Joe Naylor is obviously adept at taking classic ideas and making them his own. Yes, the Airsonic RA’s offset body is reminiscent of the Jaguar and Jazzmaster, the raised centre section, the bit that plays host to the Railhammer Hyper Vintage humbuckers, is pure Gibson Firebird. The fixed bridge and thru-body stringing add a Tele vibe.

At first glance it looks like you’re also getting regular, albeit stylised, ‘f-holes’ on the Airsonic RA. Look closer however and you’ll discover that these are actually cut-outs routed through the body. They’re a bit like a cross between Steve Vai’s JEM ‘Monkey Grip’ and the holes drilled through the body of a mid-60s Teisco TG-64 pawnshop prize. We can see how these body piercings would reduce weight, and you’ll never lose a pick inside these guys, but according to Naylor there’s more to the holes than meets the eye. “Combined with the thin wings, the thru-body f-holes contribute to the body’s ability to resonate intensely,” he says. “This produces a richer tone with more harmonic content, and makes the guitar very responsive to controlled feedback at higher volumes.” We’ll see about that.

Before we plug in and play, we should mention the roasted maple neck. Just as torrefied or baked timbers have become a big deal in the acoustic guitar world, roasted maple is causing a buzz among electric geeks. It might look like fake tan for maple but according to the Reverend website the process involves heat treating the wood “at temperatures over 300° Fahrenheit to remove sugars, moisture, and other impurities”.

Joe elaborates: “The tonal difference is not big, maybe a little less lower-mids but the big advantages are the beautiful caramel colour, and extra stability, which means that it will require less seasonal adjustment. It’s a process we will be sticking with. In fact, Reverend is the first major company to offer roasted maple necks as standard issue across all of our bolt-on guitars and basses.”

The Airsonic RA features a palm-friendly ‘medium oval’ neck profile plus a low action and smooth buzz-free performance at all stations on its fretboard. Upper fret access is good too thanks to some subtle contouring at the body heel too.

Plugging in, we’re faced by a pair of Railhammer Hyper Vintage humbuckers on a very resonant body. The pickups look a bit like dominoes with chubby polepieces for the treble strings and rails for D, A and low E. “Railhammer is all about tight lows on the wound strings, and fat highs on the plain strings,” says Joe. We get it. String balance is great and we love the fatness of the treble strings.

No matter what position you’re in, clean or dirty, the treble strings don’t get lost when you’re thumping out chords. Similarly, you don’t get that classic bottom string flabbiness that you associate with many ’buckers.

Before we bring this sermon to an end, there’s more good news. This guitar comes with Joe’s Bass Contour control. Give it a spin and it acts like a tonal coil-tap, scooping the bass response to simulate single coils and squeeze more definition out of filthy settings.

After much deliberation, the gospel is thus. The Airsonic RA provided us with the religious experience we were praying for. It’s easy to sing the praises of guitars that have been designed this well and Joe Naylor has ensured that every aspect of his guitars has been tweaked to perfection. Okay, there is some familiarity in the profile but we can’t fault the build quality, playability, tuning stability tone and value for money. We’re converts for sure.