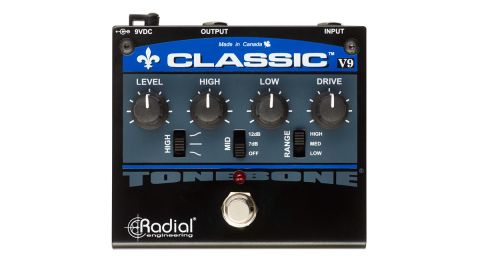 Tonebone’s original Classic was a valve-driven distortion pedal used by Eric Johnson, among others, but its larger footprint and the 15-volt power needed to drive the valve meant that it got a bit out of kilter with recent stompbox trends.

This new V9 incarnation is said to offer the same sound via FET and IC circuitry in a smaller, more pedalboard-friendly format that can run from a standard nine-volt supply.

We get standard distortion pedal Level and Drive knobs, but there’s also post-gain EQ consisting of High and Low knobs, plus two three-way switches to set up the sound - one that either rolls off or boosts the top-end to suit the type of amp you are using, and the other providing two levels (+7dB and +12dB) of midrange boost at 500Hz.

The first task with this pedal is to set the third three-way switch, which sets the gain stage to Low, Medium or High. Low finds the sounds of the signal just breaking up and, true to the original, it sounds very organically valve amp-like.

The Gain knob will take you from just a touch of grit, through raw amp break-up, to practical levels of crunch. More crunch and raunch resides across the gain range in the Medium setting, where we’re getting into nicely cranked amp territory.

Switch to High and there’s more compression, saturation and harmonic content; this is the place for the sort of distortion that will support sustaining lead playing with notes that can tail off into feedback.

While the pedal delivers dirt from a whisper to a scream, that may not mean much unless you can focus it into just the right tonal area. Fortunately, the tone controls here are highly effective in doing just that.

The High and Low knobs complement each other well in shaping the brightness and weight in the sound, while the Mid switch has a real influence on its character, offering three distinct variations and certainly playing a role in fattening up single-coil pickups, if that’s your goal.

There’s a real versatility here, in that the pedal has a gain range and tonal options that will complement a varied range of amps. It’s also a very responsive pedal that’s sympathetic to playing dynamics and cleans up nicely with guitar volume roll-back.