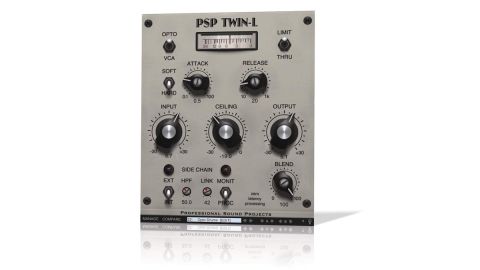 For opto- and VCA-style compression of instruments, vocals, busses and mixes, Twin-L simply can’t be faulted.

With its catalogue now comprising a wide range of plugins at an equally wide range of prices between $29 and $249 (with most under $100), Polish developer PSP Audioware has proven that first-class virtual analogue effects, from an unarguably top tier developer, don’t have to cost the earth.

Its latest budget offering, Twin-L, is a dynamics processor designed to bring meticulously modelled hardware-style limiting to your DAW. No particular real-world units are being emulated, it’s not a brickwall limiter, and it certainly doesn’t do True Peak limiting or any of that stuff. What it does offer, though, is the ability to flip between opto and VCA behaviour, an interface that keeps everything contained in a single window, and zero-latency processing, the last making it viable for ‘live’ deployment.

With its skeuomorphic GUI, Twin-L wears its faux vintage heart on its sleeve. The switch at the top left toggles between Opto and VCA mode - see Optical allusions for an explanation of the difference - with the gain reduction meter ‘backlight’ changing colour as a subtle visual reference point.

The Input knob enables up to +/-30dB of gain to be added on the way in, distorting in convincingly analogue style when overdriven, and compensated for post limiting, if required, by the Output gain knob. The sidechain can be keyed off the input signal or an external source, and a high-pass filter is onboard for taking the low end out of the detection circuit, sweeping up to 1kHz. The degree of detection circuit linkage between the left and right channels is also adjustable.

By serving up optical and VCA style compression, Twin-L is effectively two limiters in one. Both styles model real-world solid state circuitry, but how do they differ?

Invented by Teletronix founder Jim Lawrence in the late 50s, the optical compressor centres on an electro- luminescent panel, the brightness of which is controlled by the volume of the input signal. The light emitted shines on a photosensitive resistor, increasing the resistance the brighter it gets, and thus lowering the gain. Crucially, the attack of an optical compressor is frequency-dependent, the release is decidedly non-linear, and the whole thing is best described as smooth and laidback.

VCA (voltage controlled amplifier) compression, on the other hand, is fast, precise and assertive, and more about enthusiastically clamping down on peaks. When your transients are really wild and wayward, it’s usually the one to go for.

The Ceiling control sets the volume threshold above which limiting (inf:1 compression) is applied; and the transfer function (knee) at that point can be sharply angled or gently curved, as determined by the Soft/Hard switch.

Although the fundamentally effective selection of Opto or VCA has a bearing on the timing and response of Twin-L, the Attack and Release controls are the same in either mode. Attack ranges from 0.1-100ms, while Release times go from 10ms to 1s. And down at the bottom right, the Blend knob balances the wet and dry signals for parallel compression.

Price-wise, Twin-L might sit towards the bottom of the PSP Audioware line-up, but in terms of sound and performance, it’s pure class. In Opto mode, with the Input and Ceiling controls set to catch the peaks, the limiting stays polite and transparent, especially when the Soft knee is engaged - ideal for levelling vocals, guitars and other sensitive source material, and, we were pleasantly surprised to hear, adding presence and vibe to drums.

Ramp things up and the crunch of PSP’s analogue-emulating algorithm soon starts to break through, maintaining integrity all the way to decimation at extreme settings. In the more modern-sounding VCA mode, the snappier envelope and linear response deliver a tighter, punchier, more aggressive action that’s great for thickening up drums and gluing busses.