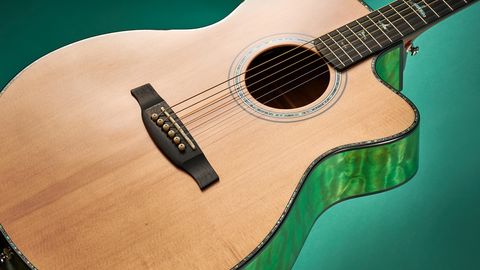 A visually striking acoustic that offers a decent performance, but not one that sets it apart from the competition at this price.

From bracing to bridge pins, there are a lot of variables involved with acoustic guitars, but visually they tend to stay on the side of conservative tradition.

The majority seem to demand a certain look to their acoustics that was pioneered by the likes of Martin and Gibson, so a green back and sides? Well, we have to confess that’s certainly something different and nothing we’ve seen before. After bedding in the SE line of acoustics with justified acclaim, PRS has decided to stretch out a bit.

Its glossy natural-finished appeal is assured when viewed from the front, but that quilted maple in Abaco Green makes the A55E far more divisive visually than, say, a Martin dreadnought or a Taylor Grand Auditorium. But, then again, that’s the point: it offers a new flavour alongside the other Black Gold stain option for this model. It’s not just an eye-catching colour; that quilt brings a watery quality and depth to the finish. But it’s worth noting both back and sides are laminated rather than solid maple at this price point.

The appointments also laugh somewhat heartily in the face of utilitarian understatement - abalone purfling and inlaid birds sparkle in the light. Tonally, it lacks the shimmery and detailed high-end overtones of a larger-bodied Martin, but there’s undoubtedly a bright resonance to be found, especially with the medium-low action on the model that we’ve been sent for review. It makes for a very comfortable experience for fingerpicking where flesh brings out even more of the warmth from the low-mids for more depth.

The 55mm string spacing at the bridge and PRS’s calling card, the Wide Fat neck, are both a big part of the playing experience. That girth may possibly be a turn off for some players out there, but it’s not as wide as you might at once fear and if you’re coming from Gibson, and indeed PRS electrics, it may actually prove to be a smoother transition to acoustic.

Plugged in, with the tone and volume controls tucked inside the soundhole, it’s the old familiar sign of Fishman’s Sonitone system that we’ve seen a lot on guitars above the £500 mark. We don’t even need to tweak our acoustic combo’s EQ as there’s a really lovely balance here from the get-go without any harsh surprises. Combined with the comfortable access of the cutaway, it would be a solid performer for stage use.

But let’s be absolutely frank here, we’re not sold on the visual of the Abaco Green. The contrast with the spruce jars just a little too much for us and we think that this will become a niche option as a result. And for a laminate back-and-sides model that comes with a pretty ubiquitous Fishman system at this price point, it faces some stiff competition to win over players outside the PRS faithful.