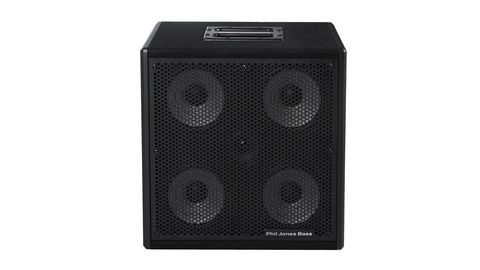 A compact but powerful rig, designed and made using top quality components.

Phil Jones’ tiny Briefcase and Suitcase combos have for many years been appreciated by  jazz double bassists, and are also a firm favourite among city-dwelling electric players who need something which they can sling over one shoulder as they catch a tube to their next gig.

Phil practically invented the compact audiophile bass combo, but his separate amps and cabs - while always sounding astonishingly good - were not always, shall we say, quite so compact. The mighty M500 and M300 amps and Piranha-loaded multiple speaker cabinets are good, very good in fact, but big, weighty and expensive. Helping to fill the gap in the catalogue between these two extremes is a range of D-series amps, and the new Cab-47.

The D400 amp redefines what ‘compact’ means. It’s tiny; in fact, our first impressions are that you don’t really get very much for your 600 quid. But take a closer look and you’ll see that despite its diminutive size, it’s beautifully designed and put together with black anodised aircraft-grade aluminium used for the chassis and case and heavy, satin milled aluminium controls.

The 1U height of the D400 means that it can be rack mounted (there’s a kit available) but we really don’t see the point. The padded gig bag it comes with should be more than adequate and keep it in good nick for years.

In use it’s mostly very straightforward. Plug in and set the micro-toggle switch according to whether you’re using an active or passive bass; there’s also a mute function on the same switch. Adjust your level, then set the five-band EQ. This consists of Lo Bass, Hi Bass, Lo Mid, Hi Mid and Treble.

These are well spaced for bass and have a massive plus or minus 18dB of boost and cut, so there’s tons of scope for a great sound from virtually anything you plug in.

The limiter, with its separate on/off toggle and status light, is controlled by just one knob. If you’ve not used one before, be warned that it’s counter-intuitive (turned fully clockwise is ‘off’) but it works brilliantly and we guarantee you’ll use it.

Lastly, there’s a large volume control on the far right. The back panel features everything you’d expect from a pro-quality amp: XLR DI out which can be switched to pre or post EQ, an FX loop, jack preamp out, headphone input and a Speakon output.

Rather than having a separate standby switch, the D400 automatically goes into standby mode when first switched on or left unused for a few minutes. In order to switch the amp from standby to on, you simply start playing; the LED will change from red to green and the amp will automatically wake up.

If you’ve ever driven a car that switches itself off at traffic lights you’ll know how unnerving this can be until you get used to it. It works fine, but if you’re using a low-output passive bass or playing an acoustic instrument with a piezo pickup, you’ll need to turn up the instrument’s volume and play quite hard to get the amp to switch on - and when you do, you need to immediately dampen the strings or turn the volume down, or the sound will be amplified.

We’re told that this is to conform with forthcoming Euro legislation, so we guess it’s something we’re all going to have to get used to - although throughout the couple of weeks we were using the D400, it did catch me out a few times.

However, once you’re used to the way it works it’s fine, and we soon fell into the habit of leaving the input selector on mute before we started playing. Personally we’d still prefer a traditional separate standby switch, though.

Moving on to the Cab-47, this marks a bit of a departure from the PJB norm, with no heavily chromed corner protectors and shiny, grained black tolex. Instead there’s a business-like matt black finish to the sides and a tough black nylon felt covering top, bottom and back. Something it does share with other PJB cabs, however, is the thick steel grille and large top-mounted grab handle, both of which are welcome features.

For such a compact cab it’s surprisingly solid, and there’s a feeling of robust quality about the unit. This quality is more than just cosmetic, too. It’s worth remembering that PJB is the only manufacturer of bass gear which produces their own speakers - and as well as bass drivers, the company designs and manufactures some of the highest-performing audio hi-fi drivers available.

The cab houses four 7” speakers, which are front-mounted with a 2” tweeter located in the centre. Around the back, each driver has its own circular port, giving the cab an extended low end and a healthy 35Hz-15kHz of nice, flat response. The cab has an 8 ohm impedance and can handle 300 watts, so two of them used together with a D400 amp would be a powerful and compact setup.

All of the PJB gear we’ve tried over the years has had a distinctive feel and sound. It’s so clean and accurate that it almost seems to ‘disappear’ when you’re playing. For double bassists, especially those playing jazz or arco, this is a huge benefit - and if this is your instrument and style, little has come close to a Phil Jones setup since the first compact combos were introduced.

However, many bass guitarists have a slightly different set of criteria, and with recent class D amps like this one, plus the brilliant twin-channel D-600, Phil Jones seems to have made a conscious effort to broaden the appeal of their range. The D400 and Cab-47 sound as good as ever with an acoustic instrument plugged in, but it’s definitely a bit more rock and roll than some of the smaller combos.

Plugging in an active five-string Jazz with the D400’s EQ set flat, there’s an impressive amount of deep, sonorous low end, which can be increased further should you need it; the cab can certainly handle it. The overall sound is clean and uncoloured and adjusting the powerful EQ, even to the extremes, results in an uncontaminated, usable tone.

Turning up the Hi Mid and Treble adds crispness as you’d expect, but it never sounds excessive, and overall we’d describe the sound of this little rig as warm and natural.

All Phil Jones gear is now manufactured at the company’s factory in Shenzhen, China. If you think for a moment that this is in any way a negative thing, think again. Phil Jones has not only overseen the building and setting up of the factory, but also personally trained the management team that organise the workforce.

Any components that they don’t make themselves - and there really aren’t that many - are military grade and imported from all over the world including the US and UK, so you can be sure it’s well designed and well made.

Overall, this a great-sounding, practical rig - and it’s hard to imagine a situation indoor or out that a pair of cab 47s and a D400 amp wouldn’t easily handle. You can’t say that about many two-box rigs that you can carry in the boot of your car...