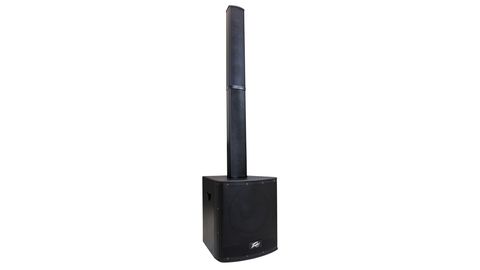 A great value system with quality sound and a small footprint.

Peavey is well known for producing affordable music equipment, ranging from guitars and basses, to amplification and PA systems.

Its latest product is a compact column array PA system that projects the sound in a different way to regular systems, which usually feature a large loudspeaker and a high frequency horn.

In the last 10 or so years there has been a rise in the popularity of these small footprint, ‘easy to set up’ line-array systems. These comprise several small loudspeakers placed together vertically in a column with a separate bass speaker.

Unfortunately none of these compact units can function as a true vertical array due to the limitations of speaker size/placement and column length, which, for boring technical limitations, doesn’t allow for full frequency audio spectrum projection in the way that the larger concert systems do.

Nevertheless, the overall effect is that you can generally hear the sound at the back of the room better than with a regular PA system.

Another benefit is a reduction in microphonic feedback due to the sound spread being handled by more loudspeakers. This means that you can often place this style of PA system a tad behind you, angled inwards for effective monitoring - no more lugging monitor cabs with you! Also, many of these budget vertical line arrays have a wider sound dispersion than regular  PA systems, leading to a generally more consistent tonal performance.

Unlike most other systems that often require multiple power cables and additional speaker leads, the Peavey requires just one power connection.

As well as supporting the speaker columns, the bass cabinet houses the power amplifiers and a basic three channel mixer. The back panel is where it all happens and where you will find the mixer section. All power and audio connections are here too.

Channel one on the mixer allows you to connect a microphone or a musical instrument via a TRS socket. Adjacent to this is a rotary volume control and a slider switch to select either mic or line levels. This is also where you would connect an external mixing desk.

Channel two comprises two jack sockets and a volume control. These sockets provide stereo inputs for an external mixer. Beneath this is the third channel. This features a pair of RCA jacks and a volume control to facilitate connection to an audio device, such as a DJ console or an iPod.

One useful feature of the P2 system is switchable voicing for bass and treble, which features two three-way slider controls (on the mixer section), one for bass and one for treble. The bass slider control switches between ‘Lo Cut’, ‘Flat’ and ‘Bass Boost’. The treble slider gives you control over ‘Voice’ (which boosts upper mid frequencies for intelligible vocals) and ‘Flat’ and ‘Treble’ response.

Finally, there are two XLR output sockets, one for connecting to another Peavey P2 system and the other to connect to a recording device. The recording output is independent of the master output volume so as not to interfere with recording levels.

The build quality is good for the price point, but we have slight reservations about longevity of the electrical connectors on the columns, either through wear and tear or damage. However, the fact that the columns are fixed in place with wing nuts will probably prevent any accidental damage occurring.

Over the last few years we’ve used a couple of small line-array systems similar to the P2 for solo gigs, so have a pretty good idea how they sound in live situations, especially with acoustic guitar and vocals.

The great benefit of this type of PA system is how well they work in difficult acoustic situations. Noisy rooms with bare walls, such as most restaurants and many pubs, present a real problem for regular PA systems  due to the uncontrolled way they project sound.

They’re pretty loud when you stand in front of them but the sound level drops dramatically as you move away. Microphonic feedback is also far more prevalent when working close to this type of PA - we’ve all heard bands struggling to control feedback due to these sort of acoustic issues.

On the other hand line-array systems like the P2 have a focused way of projecting sound - more like multiple torch beams in nature. With the multiple speakers in the columns the sound is projected much farther before the volume level drops.

The system doesn’t sound as loud as a regular PA when you’re standing close to it because you’re mainly hearing the sound from just two or three of the speakers. However, when you move further away all speakers come into play. This phenomenon helps reduce feedback issues when working close to, or even in front of the Peavey P2.

For public address you can simply plug a microphone directly into the built-in mixer. The same goes for music playback via a laptop or an iPod. This makes for ultimate portability.

We’ve also used it live over the last couple weeks for solo gigs in both large and small venues. Wherever possible we placed the P2 behind us so that we could monitor ourselves and clearly judge the sound quality that the audience was experiencing. At reasonably high sound levels we had very little in the way of feedback, and with judicious adjustments on our sound mixer and the P2 presets, we could ‘tune’ any that did occur out.

The one time we had to place it by our side - to allow for a higher volume level when we were playing in a larger venue - we noticed that the high mids and treble frequencies dropped away slightly, but not enough to prevent me from hearing clearly. This effect is due to a slightly narrower horizontal sound dispersion than some line-array systems.

The sound quality of the P2 is very good indeed. It has a firm deep bass with good definition in the midrange and clear high frequencies. The fact that you can tailor the tone and voice the frequency response is useful.

Without mentioning brands, we own a couple of different line array PA systems, one costing more than three times that of the Peavey P2, and we have to say that the P2 stood up to comparison extremely well. It sounded, as you might expect, slightly different tonally to the pricier system, but overall every bit as good and as powerful.

In conclusion, the Peavey P2 is a great sounding PA system with excellent features for the price. It’s quick and easy to set up and has one of the smallest footprints that we’ve seen.