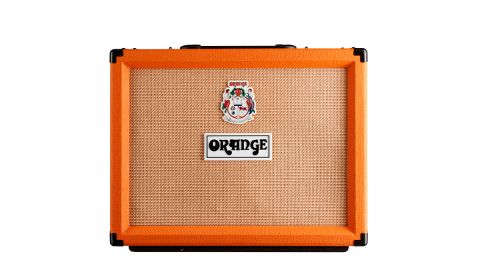 The Rocker 32 is a deceptively versatile combo, among the best Orange has ever released.

Unveiled at this year’s winter NAMM show in California, Orange’s new Rocker combo features the EL84 power valve, which has become almost as synonymous with the iconic Orange sound as the EL34s that powered its mighty 1970s OR120 watt heads.

Designed in the UK by legendary Orange guru, Adrian Emsley, and made in China, this combo is built to typical Orange standards with chunky ply cabinets, tough basketweave grilles and heavy-duty steel chassis. Inside, the electronics are PCB-based, with one large board holding most of the components, including the front panel controls and valve sockets. The components and wiring all appear first class: Orange was one of the first companies to manufacture offshore and its quality control is unsurpassed.

The Rocker 32 features Orange’s new ‘Voice Of The World Gold Label’ 10-inch custom design loudspeaker, which has a chunky magnet and looks capable of handling a lot of power.

The Rocker 32 has two of them and peering round the back reveals two separate speaker leads plugged into the chassis - a clue to the Rocker 32’s secret weapon, which is stereo with not one but two output stages. Also on the rear panel is a mono out/ stereo in valve-buffered effects loop - and it’s this that opens the door to some tantalising effects possibilities. It also features a half-power option incorporated into the front panel standby switch.

Overall, this amp looks, feels and smells like classic Orange designs - built to handle any amount of abuse and come up smiling. It’s quite compact, too, although as you might expect it’s not exactly a lightweight.

In use, the amp powers up smoothly, with practically zero mains hum, making it ideal for both recording and low-level home use.

The Natural channel may only have a single volume control, but it’s perfectly dialled in to flatter practically any guitar and it sounds wonderful, with a glassy treble giving way to an addictive chime at higher volume levels. It’s a sound that is very reminiscent of the EL84-powered AD30R combo that Orange relaunched with in the later 1990s and has since become a sought-after modern classic.

The Dirty channel’s gain control has a very wide range, allowing fine control of moderately driven sounds, with plenty of Dark Terror-approved filth at the top of its travel, making it ideal for everything from classic Brit rock and blues to modern metal. This channel’s sound is, again, typical Orange with a powerful midrange and balanced treble. It sounds great with any guitar but needs a meaty humbucker to really pull out the best tones.

Now, the Rocker 32’s stereo capability will make it almost irresistible to effects users. Plugging in a decent stereo chorus and setting the outputs to dry/wet sends a clean uneffected sound through one side and a fully wet modulated sound to the other. This wet/dry combination generates the chorus effect in the air between the loudspeaker and the ears, creating a real three-dimensional soundscape that swirls and breathes like a classic Leslie rotary loudspeaker.

Delays are big fun, too. One of the coolest things you can do with a stereo setup beyond ping-pong clichés is add a very short delay between both channels, in the 10- to 25-millisecond range, which sounds enormous, especially when mixed with a good dose of reverb.