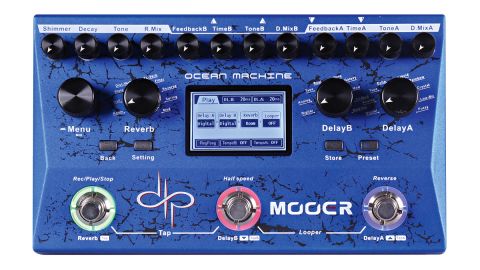 For a one-stop ambience shop, Mooer’s Ocean Machine is the logical destination.

We live in a golden age of ambience effects, yet atmosphere junkie and visionary metalhead Devin Townsend wanted more, and his collaboration with Mooer has produced the most comprehensive combined delay and reverb pedal on the market.

Let’s talk numbers: Ocean Machine packs two independent delays, a reverb and a looper. In all, you get 15 different delay types and nine different reverbs as well as 44 seconds of loop recording time.

You get two basic modes of operation for the pedal’s trio of footswitches: ‘Play’, where each switch activates reverb, delay B and delay A respectively (pressing reverb and delay B together offers access to tap tempo); and ‘Patch’, which allows you to access presets of all three effects at once.

Tonally, Hevy Devy and co have tweaked this one to near-perfection. All the usual suspects – digital, analogue, tape et al – are present and period-correct, with the crucial knobs easily accessible on the face of the pedal.

However, hit the menu knob and you’ll be presented with a host of additional parameters. These come into their own on gnarlier settings, such as low-bit and fuzz, allowing you to tweak the intensity of the effects and overall blend. The menu is also where you’ll find other handy features including tap tempo subdivisions, trails and even a global EQ.

The reverbs are similarly broad and equally stellar. Colossal hall and convincing spring tones impress, while audio anarchists will love the apocalyptic textures of dist-verb. What’s more, you can freeze the current reverb or delay sound by holding the relevant footswitch down for infinite sustain. The adjustable octave-up shimmer on all reverb types is just the icing on the cake.

Hit the delay A and delay B footswitches together and you’re into looper territory. Sticking with the format pioneered by the Line 6 DL4, the Ocean Machine packs the usual record/play/stop functions (like the DL4, there’s no undo/redo), as well as half-speed and reverse effects. These can all be routed back into the delays and ’verbs to produce massive, never-ending ambient beds for playing over ad infinitum.

The big question is how does it stack up to the big boys – in this case, Strymon, Empress and Boss. It’s an admirable performance: the range and sound quality is certainly up there, although, while a marked improvement on past Mooer pitch effects, we’d still say the Ocean Machine’s shimmer isn’t the most natural we’ve heard – an included high-current power supply wouldn’t have gone amiss.

These are minor niggles, though, on a pro-level piece of kit at a reasonable price.