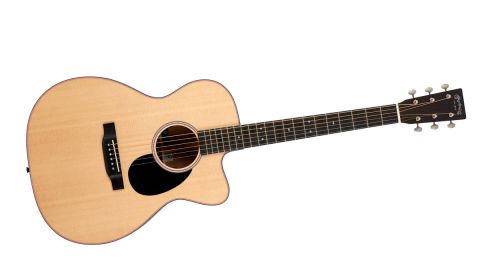 The new features reflect a consideration for offering distinct guitars that contribute to the traditions for providing pro-level instruments built to be lifelong playing companions.

The diversions from Martin series norms aren’t just enthusiastic marketing spiel aimed at collectors looking for an excuse to splash out. The company has been using the word “modern” to describe some of the appointments here, and it’s hard to argue.

The flawless pale spruce and shimmery gloss instantly put us at ease, but the silver binding on the satin back, sides and neck is striking in that it’s such a departure. And the genesis for this was an unlikely one for the Pennsylvanian company: automobile design. Martin Custom Shop’s Tim Teel and Fred Greene were influenced by the contrast of an Audi’s interior featuring brushed aluminium, but Teel found the material difficult to work with for the binding. This silver acrylic fitted the bill, paired with attractive pinstripe black, white and orange purfling that’s also a departure from expectations.

This isn’t just a case of fresh cosmetics; the dimensional and tonewood choices are where things get seriously intriguing. This guitar has Martin’s 000 shape depth and an immediate comfort that could help it ‘disappear’ for the performing singer/guitarist.

This Sitka spruce-topped model offers dynamics that respond to the gentler touch with a level of nuance we’ve come to expect from Martin, and the cherry back and sides of the orchestra OMC-16E offers a punchy mid character.

Coupled with sprightly highs, it’s an obviously Americana-and blues-friendly candidate. In terms of feel the body depth remains the similar to the recently-reviewed additions to this series, despite the narrower waistline, the latter helping it feel the most intimate of the trio for sitting down with. But it’s plugging in where an added versatility is revealed.

Fishman’s Matrix VT Enhance is now Martin’s flagship preamp system, and it continues the trend in the electro market for subtlety - the controls are effectively hidden inside the soundhole with a tone and volume dial at the top for the Matrix VT piezo and a dial inside the bottom edge for the Enhance. The latter is for the transducer pickup underneath the bridge plate. The Matrix VT represents the dynamic of these guitars very well, but the Enhance becomes a really important tool.

In blending in the transducer, it offers percussive players an avenue for expression using the area immediately behind the bridge, but also brings in a warmth to the tone that’s valuable for rhythm work.

We prefer to dial it back to halfway for fingerpicking to capture definition without things getting boomy, but that lower end presence really brings a new, deeper dimension to the OMC-16E if you want it. The result is a superb system that balances minimalism with usable versatility.