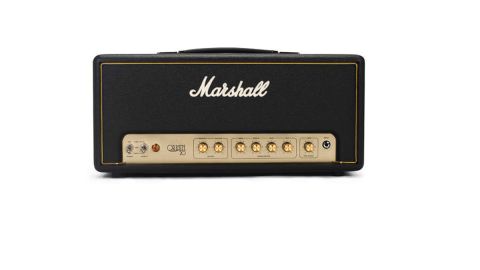 The Origin 20H marks a return to form for Marshall, with a killer price point and a well-thought out set of features that make it perfect for pedal players and purists alike.

So, what’s your ideal Marshall? Thanks to renewed interest from many pro players, the sound of those early amps that made Marshall’s reputation in the mid-1960s has made a big comeback, but they aren’t so flexible and typically need help from a handful of effects to tame them.

Heads like the JTM45 and Super Lead are unfashionably loud, dating back to an era when PA systems were non-existent. Today, what’s needed is some way of turning the amp up so you can hear those power valves working, without being sued by your audience for hearing loss, or annoying your FOH engineer, right?

An effects loop would be nice, better still if you could footswitch it, and a footswitchable gain boost would be great, too. And how about if the amp had that cool jumpered channel feature from the old JTMs and Plexis, but without a patch lead to lose, or break? Marshall has been listening and the new Origin amp series could be exactly what many of us have been asking for.

We’re taking a look at the Origin 20, which sits in the middle of the range and comes as a head, or a 1x10 combo. The Origin 20 head features some cool vintage Marshall-styling cues, with slimmer cabinet panels covered in black vinyl, teamed with gold piping and a gold aluminium control panel topped with a small logo. This pushes the right style buttons for many players, but it’s what’s inside that’s really interesting.

The Origin 20 has a proper, dual-EL34 power stage featuring Marshall’s clever new Powerstem power reduction, so you can balance the master volume with a choice of three power levels to suit the venue. There’s an effects loop you can footswitch, a speaker-emulated DI output, a gain control with a boost that you can footswitch, and a super-cool Tilt control that emulates mixing the High Treble and Normal preamp volume controls of a classic four-input JTM or Plexi.

A familiar bass, mid and treble tone network combine with a proper presence control that fine-tunes the output stage’s high frequency response for all the control you need. It’s all put together with typically robust construction to withstand non-stop touring, and has plenty of ‘I want’ visual appeal.

The Origin 20 is all about pre-JCM800 vintage Marshall tones, particularly the JTM45 and early Plexi heads that drove the ground-breaking British blues explosion in the mid-1960s. Using a regular Strat and Les Paul plugged directly into the input jack, the Origin 20 does an excellent job of reproducing the JTM45’s distinctive complex treble response, full of glassy harmonics and overtones that get progressively edgier as the volume knobs are turned up.

On old Marshalls players quickly discovered that linking the two preamp channels with a short patch lead so they were both audible added significant extra gain, as well as better tone control from balancing the two volume knobs. The Origin’s clever Tilt control effectively mimics this, meaning you can precisely control high-end zing.

The Origin isn’t a mega-high gain design. But by activating the gain boost and turning up the master volume you’ll get a respectably vicious crunch even at low volume levels, thanks to the clever Powerstem circuit, which drops the output from 20 watts down to 3 watts or a bedroom- friendly 0.5 watts.

However, the Origin 20’s speciality is vintage- approved low and medium gain sounds, which make it a great platform for pedals, especially as the series effects loop is footswitchable. The speaker-emulated DI output sounds great into a desk and is ideal for recording or live plugged into a PA.

Teamed with a suitable cabinet, the Origin 20 does a great job of bringing those classic Marshall sounds up to date in a highly usable design that’s also compact and portable, while offshore manufacturing keeps the price affordable.

Early Marshalls had great flexibility from a very simple control layout and the new Origin 20 is just as versatile, making it an ideal choice for blues, classic and indie rock, with just enough in the way of modern features to satisfy most needs, especially when paired with a good drive stompbox or two.