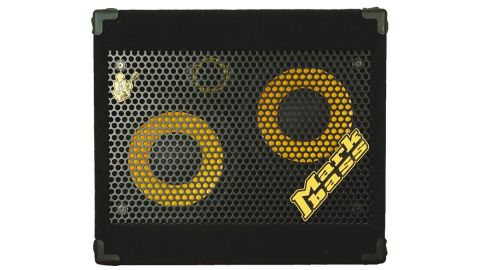 Another great range of products from Markbass.

Markbass must be doing something right.

As if having bass superstars like Richard Bona and Michael League endorse its products wasn’t enough, the Italian company has now tied up a partnership with the legendary Marcus Miller. The new range consists of four 250, 500, 800 and 1000 watt amp heads, plus two new cabinets. We’ve got the 250 and 800 heads plus the 102 cab to try out, so let’s get them out of their boxes and fire them up...

Like other Markbass signature products, the new 250 and 800 amps stick pretty closely to the tried and tested designs that have made the brand so popular. Although the preamp layout and graphics are different, both amps are clearly based on, and developed from, the Little Mark head. That’s a very good thing because the ‘standard’ Little Mark head is a great amp in its own right. Let’s check out the Little Marcus 250 first.

Despite being the least powerful of the new range, the 250 gives nothing away in terms of features to its more powerful siblings. It’s easiest to describe this amp as having two distinct EQ sections.

Firstly, ‘EQ1’ is a five-band EQ similar to that on the standard Little Mark lll head, albeit with the frequency centres adjusted to suit Marcus Miller’s own preferences. Above this are two controls which make up the second ‘EQ2’. Again, these are similar to the VLE and VPF filters on the standard Little Mark head, but once again they’ve been re-voiced and renamed to suit the great man’s specification - and we have to say that the function of ‘Old School’ and ‘Millerizer’ are much easier to figure out than ‘VLE’ and ‘VPF’.

The characterful names aside, both controls do fundamentally the same job as their Little Mark counterparts. The Millerizer scoops the mids while boosting the low and high frequencies for that familiar slap tone, while Old School boosts the warm mids and subtly rolls off the highs and lows.

Both EQs have a corresponding blue LED and can be independently selected via any standard two-pedal latching footswitch. Another new and genuinely useful feature is the amber-illuminated input socket that gently pulses when you hit the mute button.

Turning to the Little Marcus 800, rather than the yellow acrylic front panel of the 250, here we have a snazzy brushed stainless finish which really does look the business. The two EQ sections are identical in terms of function and appearance to the smaller amp, but this head really scores with its bigger - much bigger - power amp module. Markbass is one of the few manufacturers that produces its own proprietary class D power amp modules. This is the MPT unit which features in all Markbass digital amps, and which was designed and developed specifically for bass.

Turning to the 102 cabinet, this is the product of some new, ground-up thinking. Although there are other cabinets with two 10” drivers and an HF unit in the Markbass catalogue, this is very different, most obviously in terms of its physical appearance. The wedge design allows it to be used either as a tilt-back monitor or standing upright. It’s big for a 2x10 by current standards, but the dimensions and rear porting mean that you get an amazing low-end extension and response. This, coupled with the exceptional top end from the new 1” voice coil tweeter (the same as that used in the New York 122 Ninja cab) and the super-fast transient attack of the 10” neodymium speakers, add up to a very impressive cabinet, especially when hooked up to one of the new amps.

The 8 ohm impedance means you can use it with another cab, but personally we’d have liked to see it also available as a 4 ohm cab - like the Markbass New York 122 - so that you’d get the full output from the Little Marcus heads.

Used together, this is a rig to be reckoned with. Even with the smaller amp driving a single 210 cab, drawing roughly 130 watts from the amp, there’s tons of headroom. The sound is immediate and crisp with a fat, focused low end. This would be a great setup for someone who needs a clear and bright sound on stage while they hand over the job of amplifying for the audience to the main PA. Swapping the 250 for the Little Marcus 800 ups the ante considerably - and with the bigger amp, although the tone is very similar, everything sounds more relaxed, with the gain set lower and a much deeper reservoir of headroom on tap.

In use, the re-voiced EQs of both amps are easy to manage, and the subtle re-voicing adds a layer of versatility over the standard amps. If you love Marcus Miller’s bass sound - who doesn’t? - you’ll love this new Markbass gear.