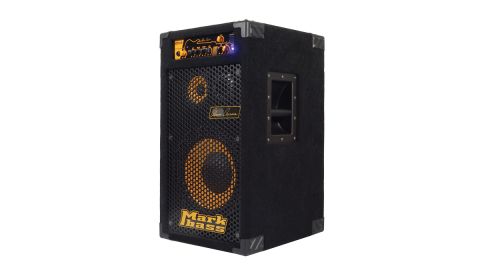 We expect Markbass combos to be good. This one’s exceptional, and ticks every conceivable box for sound and quality.

How do you define the ultimate bass combo? Sound quality? Power? Size to weight ratio?

Of course, you’d take all of these things into account - and that being the case, a strong contender would have to be this new Markbass K1 Alain Caron signature combo.

Visually, the K1 is clearly a Markbass product, but it differs when compared to the previous version in several important ways.

Perhaps most obvious is that it’s a good deal heavier. That’s partly due to the more powerful amp and extra 5” speaker, but it’s mostly because of the new three-way cab and redesigned long-throw 12” driver. It’s built to handle and reproduce a huge amount of low frequency bass - so it needs to be robust.

We used the K1 solidly for a couple of weeks in a wide range of settings from concert halls to intimate clubs - and boy, did it deliver in every situation.

However, using it every day like this did throw up a little niggle, so let’s deal with that first. Unless you have tiny hands or you’ve trained as a bovine vet, the amp’s back panel is virtually inaccessible in the normal way, due to it being such a long way into the depth of the cabinet.

To solve this problem, there’s a small removable ‘trapdoor’ section on top of the amp which allows access to the power in, DI input and so on from above. There’s no handle or tab to grip from the outside, so you still need to pop it out via the back of the amp.

This solution works well enough, and when in place keeps the external profile of the amp uncluttered, but we have to say it does feel like a bit of an afterthought - and plugging in the DI or using the effects loop is a bit of a faff. That aside, everything else is very straightforward.

By the way, a useful feature which we haven’t seen on the back panel of a Markbass combo before is the Speakon connection for the speaker cab, meaning you can use the amp head with a different speaker, or add another 8 Ohm cab if you wish.

If you’re familiar with the standard Markbass front panel layout, you’ll see a lot that’s familiar here. Noticeable by its absence is the usual VLE (vintage loudspeaker emulator) filter, leaving just the VPF (variable pitch filter). On most Markbass amps and combos you can leave the EQ pretty much flat and use the two filters to get your perfect bass sound.

Here, the VPF still gives you a wide range of sounds, increasing the low end and high frequencies while scooping the mids at just below 400hz as you turn it up, but for fine tuning some input from the EQ is also needed. This is no bad thing, of course - that’s what it’s there for, it’s just a slightly different way of working if, like me, you’ve always left the EQ flat when working with the standard Markbass preamp layout.

With the EQ flat and the VPF off, the sound from the amp is remarkably uncoloured. This means that whatever bass you’re using, you get the absolutely true sound of that instrument. Our old passive Precision sounds distinctively ‘Fendery’, while a modern active five-string with its own powerful EQ sounds bright and punchy, just as its maker intended.

So far so good, then. We have a compact - if slightly heavy - combo with a billiard-table flat response and plenty of oomph. And we mean plenty. Although it’s rated at 1000 watts, the 8 Ohm cab means you’re drawing about 600 watts from the combo on its own. With such an efficient cabinet design, the K1 was always going to be loud enough - and make no mistake, this amp is capable of some massive sound levels.

What’s really impressive is not just the volume this amp can reproduce, but the quality of the sound at such high levels. There’s virtually no clipping at all: the sound is super-clean even when ear-splittingly loud.

We’ve played through decent 4x10 rigs that sound less impressive than this. You might imagine that a single 12” speaker would perhaps lack a little of the very lowest frequencies when pushed, but that redesigned driver and the rear ported cab deliver a flat response right down to 40hz – and on several occasions we actually found ourselves backing off the bass. Amazing.

The new Alain Caron K1 combo is a big step up from the previous model, which itself was a great amp, so if you’re after the ultimate bass combo and you have the funds, you really should give the K1 a test drive. You may not play like Alain Caron, but we promise you’ll be heard - loud and clear...