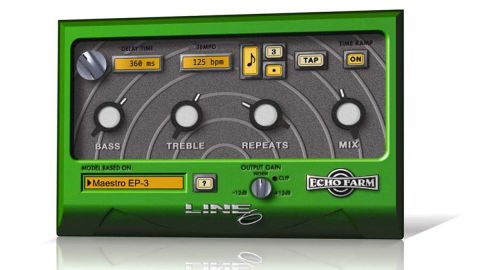 It’s too expensive, but Echo Farm still has plenty going for it, particularly for the less technically-minded musician.

First released for Pro Tools TDM (and thus requiring expensive dedicated DSP hardware to run) in 2001, Echo Farm has since been through quite the development ringer.

Despite being hugely popular with TDM-toting producers, Line 6’s classic hardware-emulating delay effect was discontinued in 2010, only to make a surprise return in 2017 as an AAX (the native successor to TDM) plugin. And now users of DAWs other than Pro Tools can get in on the action, as Echo Farm has finally been blessed with VST and Audio Units compatibility.

It’s great news, for sure, although tempered somewhat by the fact that, despite its v3.0 suffix, this ‘new’ Echo Farm is identical in every way to the 17-year-old original. If a plugin could ever be called a ‘classic’, Echo Farm certainly qualifies, but with so many obviously more powerful delays on the market these days, can this venerable workhorse still cut it?

Echoes of the past

Echo Farm models 12 delay units, mixing up vintage hardware devices and “Line 6 originals” - see The Dirty Dozen. The model is loaded via a dropdown menu that could really do with ‘next’ and ‘previous’ buttons, and the fascia of the plugin switches to a different, endearingly old-school design to represent each one.

The controls are few in number, with the core parameters - Delay Time, Repeats (feedback) and Mix - remaining constant for all models, and two contextual knobs changing their function to suit whichever one is loaded: Tone and Bit Reduction for Lo Res Delay, Bass and Treble for Boss DM-2, Offset and Stereo Spread for Ping Pong, etc. The only exception is Roland RE-101, which has a single Head Pattern knob.

The Delay Time is set in milliseconds (1-2500) or synced to host tempo, with a gathering of buttons used to select note value, set dotted and triplet timings, or tap the tempo in with the mouse. While Echo Farm’s models all output in stereo when used on a stereo channel, none of them allow you to adjust the left and right delay times separately. There is the Ping Pong model for ‘bouncing’ delays, though, of course.

Last but not least, the Time Ramp button switches the behaviour of the plugin when changing delay times between instantaneous jumps and tape-style slow-downs and speed-ups. It’s nice to have the choice.

Down on the farm

Echo Farm is a tricky thing to judge within the broad context of music production software in 2018. There’s no getting away from the fact that its functionality and design are anachronistic, but it certainly doesn’t feel irrelevant or archaic. Indeed, it offers a good range of delay styles, the models still stand up pretty well, sonically, and it couldn’t be easier to use. It’s also a lot of fun to play with, thanks to that minimal, distraction-free interface.

Half of Echo Farm’s 12 modelled delays are named emulations of vintage analogue and digital units, while the other six are in-house creations by Line 6 itself. Clicking the question mark button on the GUI pops up a description of the currently loaded model.

The Line 6 models, meanwhile, are more task/effect-specific. Lo Res, for example, can drop the quality all the way down to 6-bit, Sweep Echo modulates a filter over the delay line, and Reverse plays backwards.

Obviously, with only two custom controls for each model, Echo Farm’s emulations are in no sense ‘complete’. In terms of the sounds produced, however, they acquit themselves very well. We particularly like the Space Echo and Memory Man.

On the other hand, the far more powerful and flexible likes of EchoBoy (not exactly a young contender itself!), Timeless 2, VintageVerb, Outer Space and many other alternatives make Echo Farm look positively quaint in comparison - and, sadly, rather overpriced.

It’s not a rip-off by any means, but given its age, the monetary envelope is definitely being pushed here. Should you happen to have a license for the original TDM version, though, the $50 upgrade fee is thoroughly reasonable.